I know, I know: It may be springtime meteorologically speaking, but very few springtime fruits/vegetables are actually in season. I know this intellectually, and I know this because I keep buying terrible strawberries.


Still, it had to be done. I cannot be deterred!

I mostly stuck to Smitten Kitchen's recipe, which in turn stemmed from something the amazing Nigella Lawson did. (Sidebar: If you Google Nigella, you can see a photo of her in a shirt which reads "English Muffin." !!! Love her.) (She's British and feisty for those of you not in the know.)

Anyway I have learned that the difference between a crisp and a crumble is the texture of the topping. Crumbles have some baking powder and probably no oats/nuts/textural elements, so it's more a nudge in the direction of a shy cobbler. Crisps have oats and nuts and subsequently more crunch. I am a big fan of chewy oats on top of warm fruit, and I cannot say no to nuts in a dessert, so I have married the two and created... A Crisple! Or... crusp? I think crisple has a little more whimsy to it, so let's stick with that.

Back to the recipe: instead of zesting a whole lemon for the topping, I did 1/3 of the lemon, zested a little more over the fruit itself, and I also split the zest from one clementine between the fruit and the topping. Both were also tinged with a little cinnamon. In the topping, I added a handful of oats, because I can't help myself, and also some sliced almonds. For crunch. Here's a close-up so you can get a sense for quantity of Extras: 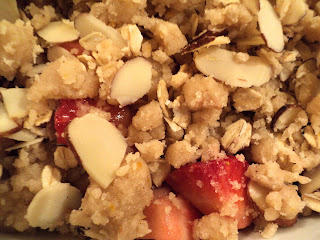 And here is the finished product, still bubbling:


And here's a close-up so you can see the ruby bubbles in action, sort of: 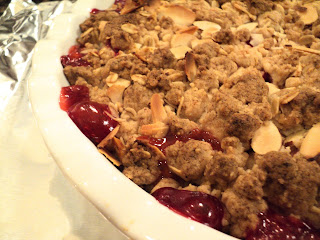 We don't have any whipped cream or ice cream. Shall I top it with plain yogurt, usually reserved for smoothies? Will the yogurt need a little sugar, or is the fruit sweet enough to counter yogurt sour?

I should also note that, in an earlier post, I mentioned I might use some Splenda to make this "healthier." Substitution of this sort is unusual for me because I prefer the "whole foods" approach to healthy cooking, meaning portion control and minimal processed foods, rather than low-sugar this and low-salt that. Regardless, I forgot about the Splenda idea. So this is a combination of regular white sugar and Florida cane sugar. (The latter because the Smitten Kitchen recipe called for demerara, to which I said: "What am I, made of money??")

Following up: Delish. Tart, fresh, sweet, fruity. I may cut back on the amount of topping next time. This fruit-to-topping ratio was close to 1:1, while my intention was for a mostly-fruit dessert. In terms of my flavor improvisations, happily, both the cinnamon and the two types of zest melded perfectly into the ensemble so none were readily identifiable. Nice and cohesive.

Some say cooked strawberries taste like cotton candy. I'm not sure I agree with this, but isn't it a lovely notion?