One of my favorite kitchen appliances is my slow cooker. Mine is hand-me-down, and it dates back to the 70s. (Correct me if I'm wrong on this, commenters!) It works perfectly, despite its age. Thanks Mom and Dad!


Slow cookers allow you to transform large, inexpensive pieces of meat into amazing, succulent morsels cooked in vegetable broth. It's also great for a "one pot" meal, though I choose to use a secondary saucepan for the gravy. I love this for wintertime, obviously, but really anytime I want a meal that can be prepared in advance and which I don't have to babysit, this is the way to go. I like pork roasts, particularly in the summertime, for bbq-style pulled pork. I like beef roasts for, well.. a pot roast.

Here is my method:

I look for a roast which is at least 3lbs, ideally bone-in, and with some visible fat marbling. This time I used a chuck roast, hence all the fat.

Then I salt and pepper the roast on all sides, generously, and rub it down with tomato paste. I like to buy big cans of tomato paste, and then I scrape the leftovers into a plastic bag and freeze it. Then I break off the frozen pieces as needed. In the picture below, you can see it's still in frozen pieces even though I'm trying my darnedest to melt it with my hands. Brrrr....
Then I slice an onion and put it in my slow cooker. I add some herbs (rosemary, thyme, bay leaf), add some liquid (beef broth, red wine, splash balsamic vinegar) to almost cover the onions. Salt and pepper. 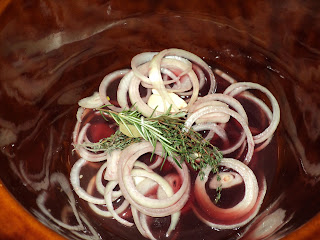 Then I add the meat and, if it feels right, I will add a little more balsamic vinegar to the top of the roast, maybe a splash of soy sauce, maybe a splash of Worcestershire. MAYBE even a sprinkle of sugar. I tried to get a photo of this step but it didn't work so well. Here's a cat picture instead:

Then I let the meat cook for something like four or five hours. On high. You heard right! Just cook the bejesus out of it. Flip it over half way through so both sides get equal air/liquid/onion/herb exposure. While that happens, you can live your life as a free as a bird. I like to go ahead and do all the vegetable cutting during this time so I won't have to deal with it later. These are the vegetables I used:
For this go-round, I tried out a turnip. Prior to this present venture, I had never in my life purchased, handled, or eaten a turnip. Shocking, right? Maybe not. I was looking for a little veggie variety, and I've read that turnips are good potato replacements in terms of flavor and texture. So, I reduced the amount of potato, and added a turnip. You'll also notice this is the second onion I'm using... the first one, the one that is underneath the meat, will have been cooked down to complete mush. Its primary function was to flavor the beef broth and to serve as a "bed" so the meat wouldn't be sitting directly on the bottom of the slow cooker and the herby oniony liquid could, therefore, circulate freely underneath.

ANYWAY.
The turnip, I should also say, was awesome. It tasted great raw (like a cross between a potato and a carrot... very crunchy, a little sweet) and it cooked in with the other vegetables wonderfully. It kept more texture than I was expecting, meaning it was still "al dente" when the other vegetables were soft, but I thought that was a welcome variant since pot roasts are so soft in general.

After several hours, when the roast was cooked through, I took it out and set it aside. 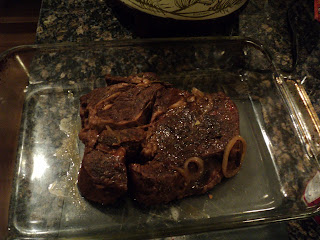 Then I added the vegetables to the pot to cook for an hour or two. ...Definitely closer to two.
Once the vegetables seemed well on their way, I added the roast back in the pot and let everyone hang out for another hour or so. Then, when the vegetables are all soft, the meat is tender, and we just can't stand to wait any longer, it's time to make the gravy. This step is entirely optional, but it has two main benefits:

- Removing the liquid from the pot makes it easier to skim off the fat, and
- The broth itself is pretty delicious, but thickening it with flour will help it coat the meat and vegetables.

The broth may also need some flavor attention. Optional additions:
I turn off the heat, take out the meat, and ladle as much of the liquid as I can into a large liquid measuring cup. Let the fat rise to the top and skim off as much as possible. If you have time to spare, it's easier to remove the fat if it's cool. So.. throw it in the fridge? Once the cooking liquid is as "fat free" as possible, pour it into a saucepan. Then I boil it like crazy so it can condense... I'll let it go until it's at least 25% reduced, maybe as much as 50% depending on my hunger level. There was a lot of water in those vegetables, after all. While that's happening, I cut up the meat into chunks, remove as much of the remaining fat/bone/etc. as I can, and then I move the meat and vegetables to a large casserole dish.

Back to the gravy: spoon maybe 2/3 cup of the condensed liquid into a small bowl, add a few tablespoons of flour, and mix until it's smooth. Add more flour or liquid as needed to create a nice, silky mixture. Then I put the flour/broth mixture back into the main saucepan and let it cook until it is thick and lovely. 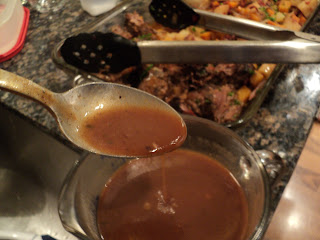 Spoon it over the finished product before serving, and set aside extra gravy for optional additional adornment. Sprinkle parsley if you're going to take a photo.
Add some crusty bread, and you're good to go. This dish lasted five meals. (Between the two of us.)
Posted by Lenore