Growing up, my dad used to make a dish we called chicken tarragon. This meant a tomato-based chicken spaghetti with dried tarragon as a key flavor component. He'd cook the chicken in the sauce itself so the sauce ultimately had a lot of chicken flavor. I don't know that I've heard of a dish like this anywhere else.. that is, I know chicken and tarragon are often served together, but I think that is more in white wine-based dishes, or buttery French classics. Our family "Chicken Tarragon," as I know it, is quite Italian in terms of flavors, the only possible exception being the tarragon itself. Anyway, I make Chicken Tarragon, too, with a few Next Generation riffs.

I start with chicken thighs because they have great flavor and are so, so inexpensive. You want bone-in for best flavor, but the skin and fat is entirely optional. Feel free to pull/cut off any undesirables before browning it up. But, if you do this: add a little extra oil to the pan to prevent sticking. Also, if you or someone you live with happens to love crispy chicken skin... now's the time for a treat!

I salt and pepper the thighs, then brown them up in a big stock pot.
Turn them a few times so all sides get some love. Once the skin looks adequately browned, I take them out of the pan and set aside. (The object isn't to cook the thighs; just trying to get some browned "fond" in the pan.) (So, again, if you're using skinless meat: totally fine! Brown them up as best you can anyway and you'll get an excellent foundation all the same.)
I also like to use this time to remove excess fat from the thighs. Otherwise it'll just melt into the sauce, and who wants greasy tomato sauce? Remember the chicken is still pretty raw inside, so be sure you wash hands, etc., as needed.

Then I cut up some vegetables, again erring on the side of too many vegetables rather than too few.
Then I throw the celery, onion, carrot, spices, and herbs into the pot I used to brown the chicken. (A few sprigs thyme, one bay leaf, a teaspoon of dried oregano, a tablespoon of the tarragon.) (I measured none of this. Eyeball it. Don't be scared.) Add a little olive oil if necessary to keep everyone a-moving.
Cook the vegetables on medium heat until they've got a little color on them and have softened a fair amount. Then you can throw in a couple smashed garlic cloves, and you can add the tomato paste.

I used half a full-sized can of tomato paste, scraping any unused paste into a baggie, which I then froze for future use. Stir the paste into the vegetables and let it cook for a minute or two. Then, add all your liquids.

I use maybe 1/2c of wine---I think red wine adds a really lovely complexity to the sauce, and Alton Brown says alcohol "unlocks" certain "flavor compounds" in the tomatoes. Whatever that means. Add back the skinned, de-fatted, par-cooked chicken thighs.

***
DON'T TELL ANYONE I TOLD YOU THIS: If you want to stretch the sauce and/or augment it, you can add a can/jar of store-bought tomato sauce. By this point, you have essentially made your own marinara, so it's not at all necessary. But it will stretch the sauce farther if you're concerned about quantity. And, if you're insecure about the spiced you used, etc., it's okay to let the folks at Prego/Bertolli/Paul Newman help you out. Just be sure you add it at this stage of the process, giving your sauce has time to meld with the store sauce.
***

Now everything is nice and soupy and it should simmer gently for as long as you can stand it. (45 mins to as long as 2 hours. Or maybe longer.) Keep it mostly covered to prevent spatters on your stovetop.  It's important to let the sauce simmer for a while because it cooks the chicken, cooks the tomatoes and other veggies. It also gives all the individual components time to meld together. Be sure to stir it every 20 mins or so to prevent scorching.
Once all the vegetables are soft and the chicken is falling off the bone (again, at least 45 mins, ideally longer), take the chicken out and let it cool for a few minutes. When it is cool enough to handle, pull the meat off the bone and separate any fat or undesirables. You can cut the meat into pieces, or you can shred it, or leave it in huge hunks. Your call!
Fish out the bay leaf, thyme sprigs, and any other solid items you don't want in the final product. (Like... um... rocks? Why did you put rocks in your sauce?) I also like to add some red pepper flakes and a squeeze of lemon to wake everybody up. A little lemon zest is good here too. Not a lot, you're not trying to make it "lemony," you just want that acid and fresh citrus flavor to give the sauce a final kick in the pants.

Also taste it to see if it needs salt or anything else. Too tangy? Add a little (1/4-1/2tsp) sugar. And/or a small pat of butter. Or olive oil. Taste boring? Salt! Lemon juice/zest! Red Pepper! More tarragon!

Then I like to use the immersion blender given to me by my future mother-in-law (Thanks!) to blend the sauce together. This step is 100% optional and would not have been done by my father, but I like it because it allows the sauce to coat pasta more easily. If you do not blend the sauce, it'll stay kinda soupy. Still delicious! Just a little "watery" if you're going to have it with pasta. And that's not even a problem because it gives you an excuse to add sauce-mopping garlic bread to the menu.

Actually, advice-time: If you don't have a blender and/or want it to remain as a sort of "stew," you could do what we did with the beef roast sauce in the previous blog. That is, take some of the liquid out of the pot, mix it with some flour, then add it back and simmer. This should help make the broth a little more velvety, less watery.

After blending (or not blending), you can add the chicken back to the pot.
Then serve with pasta of your choice! Or cool it down and freeze it for future use. Or both. 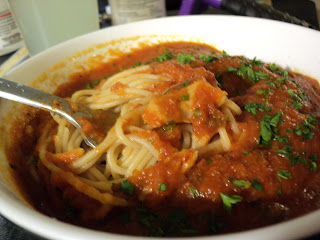 Pro tip: This is perfect for a "Sunday meal" because you can take your time with the sauce. But if you want to make this on a weeknight, you can always cut up the vegetables ahead of time so the prep work is behind you. Cut them extra small so they'll cook faster. Put them in a container with a lid and store them in the refrigerator until ready to use. You can even toss the vegetables with salt/pepper/thyme/oregano/tarragon ahead of time so you don't have to fuss with it later. Then brown the chicken, take it out of the pot. Add the veggies, cook for a few minutes. Add the tomato paste, cook a minute. Add the liquids and meat back to the pot and cook for an hour. Easy! Ish.

Super pro tip: If you're in a crunch, skinless, boneless chicken breast will absolutely work in this and it'll cook faster. (Meat with bones takes longer to cook than meat without bones.) It will not taste quite as amazing though. I suspect that you'd only need the sauce to cook for 30 mins or so if using chicken breast. Again: won't be as amazing. But still good.