Before I get into the latest masterpiece, I want you all to know that my betrothed makes dinner too. Look!
All I did was supervise, which largely meant commenting the cheese was not melty enough. I am very, very passionate about melty cheese. Thanks, babe!

Some of them aren't exactly rules ("As I get older, I like beer less" ??) but I like and agree with a lot of them.

And, final announcement before we get into another Captain's Log: I have been experimenting with the "Read More" link. Seasoned blog readers are probably familiar with this function. Anyway, what it means is that, for longer posts, rather than having the whole shebang show up on the blog home page I will insert a divider which to you appears as the words "Read More." You click "Read More" and it takes you to the full version of the post. You should arrive right at the point where you left off. Just want to be sure no one is missing content! I labor over these words, people. Labor!

Here's a test to see what we've learned:

Did you click it? Are you still with me? Great!

Being so close (/so much closer) to our friends in the Pacific (..Asia..), I think it's important we try to consume more foods with Asian flavors than we did while on the East coast. My other half, however, is not so familiar or comfortable with Chinese food, sushi, and the like, and still we're creeping slowly-but-surely toward that exotic goal. This means "sweet and sour chicken" at the food court. Tasting whatever I get. I even attempted a stir fry a few months ago, but I may have hurt the cause. Let me just say that stir frying is bare-knuckled boxing for home chefs. It's so brutal! So fast! So hot! I overcooked everything. The sweet sugar snap peas turned a terrible mushy stale green. The chicken was bland. The carrots had no texture at all. Sauce was boring. And the rice, well, I'm no good at rice. But that's another story.

Alas I have some good news. I channeled my mother for this one. Growing up she would make what we called "shrimp teriyaki" for special occasions, and almost always on request. I believe it was simply shrimp, scattered in a single layer on a baking sheet and roasted with butter, soy sauce, and pineapple juice. We LOVED it.

So, I recently tried once more to make something generally Asian-themed to get us headed in the direction of Seattle's many pan-Asian offerings. This time I peeled the shrimp, tossed it with a little salt, garlic powder, paprika, and cayenne, followed by a mixture of flour and cornstarch. 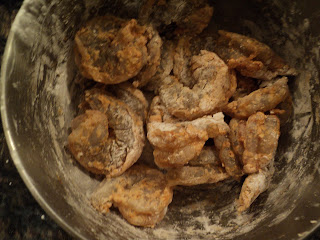 Then I cooked it in a hot, hot skillet. 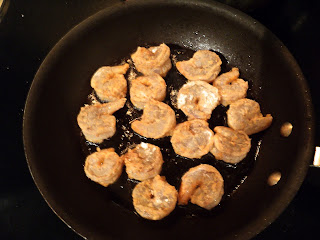 About 2 mins per side, then I took them out of the pan and added diced fresh pineapple and green onions to the same pan, still on high heat. I let the fruit get hot and caramelize a little bit, then took it off the heat and tossed with the shrimp. 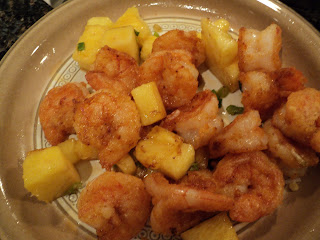 We ate this with imperfect basmati rice (because we had no short grain, imperfect because I'm bad at rice) and peas as an optional mix-in. What you see there is half of a one-pound bag of 26/30-sized frozen shrimp. When I engaged in my usual mid-meal interrogation regarding the food (would he eat it again, what's the best/worst aspect, etc.), my love responded, "I would eat it again right now. Or for breakfast. Or tomorrow."

So... it was terrific! The only improvement I would make is smaller shrimp, and/or shrimp cut into smaller pieces so it is easier to get a bite of all the elements at once. I might also add more green onion, and cook the pineapple a little longer, and perhaps someday we can add baby bok choy, water chestnuts, sliced peppers (both hot and not hot), fish sauce, sesame oil, and even mushrooms and make a lovely rich sweet soy-pineapple sauce.

But I get ahead of myself. This was terrific entry-level "Asianesque." And the crust on the shrimp! The flour/cornstarch was perfect for adding just a slight crisp to the outside without any heaviness. Definite do-again.