Mac and Cheese, plus a Beet-y bonus

I didn't grow up in a mac and cheese household. We had Velveeta Shells n Cheese sometimes, and, don't get me wrong, I still love that stuff. But homemade mac and cheese was never something any of us really invested time into perfecting. I didn't miss it, though---we had plenty of amazing decadent other dishes to choose from.

As an adult, though, I do have a go-to mac and cheese recipe which I make every few months for a treat. I started with Robin Miller's recipe on the Food Network. Robin's whole schtick is "Quick-Fix" home cooking for the working parent, so she creates strategies wherein, for example, you cook four chicken breasts at once, use two in a given recipe, and you save the other two for a meal later in the week. The quick-fix strategy applies to her mac and cheese in the sense that a) there's no baking, and b) everything comes together in 20 mins or less. Reasonable for a weeknight, right?

My only caution is that, while it's a fast recipe, it takes a lot of focus. It requires three different pans going on the stove at once, and two of the three are at risk for burning/overcooking if you leave them unattended.

Here's what you need:
(once more, please note this is adapted from Robin Miller's Mac n Cheese on foodnetwork.com)

This fills a 13 x 9 dish nicely. I like to half the recipe when it's just the two of us.
Here's what needs to happen:

- Pasta is boiled in salted water until just al dente.
- Pasta is drained and tossed with yogurt/sour cream, a little salt/pepper, and set aside
- Cheese is grated (if necessary)
- Cheese sauce is made and kept warm but NOT hot
- Breadcrumbs and parmesan toasted in a dry skillet

The timing can be tricky because, for example, you don't want the pasta to get too cold after you set it aside. So, it needs to be cooked, drained, and tossed with the yogurt all right around the time that the cheese sauce is finished and the breadcrumbs are toasted. It can be done! Just stay focused.

I like to get the pasta water boiling while all other ingredients are prepped. This means grating the cheese...
...putting the evaporated milk in a saucepan and hold it at LOW heat

...and throw the breadcrumbs and parmesan into a dry skillet for toasting

You can even prepare your Final Serving Dish by spooning the yogurt/sour cream into it. When the pasta is drained, you'll put it in this dish and toss it with the yogurt. /sour cream.

Now that everything is in place, you can turn up the pasta water if it's not already boiling, and get everybody on their way. Boil the pasta. Once the milk mixture is warm (bath water temp?) you can either let it "steep" for a few mins, or you can just take out the garlic cloves and add the cheese. Let the cheese melt slowly into the milk. Do not let it get too hot! Cheese and milk will both separate if they get hot... meaning the mixture will "curdle." It's still edible, just, you know, ugly. Turn the heat up on the breadcrumbs/parm as well so they can get toasting. Stir them around every few minutes for even color.
Still with me? When the pasta is ready, drain it and toss it with the yogurt/sour cream. If your cheese is smoothly melted into the milk, you can go ahead and pour it over the pasta and stir it around.
And don't forget to sprinkle your toasty breadcrumbs! 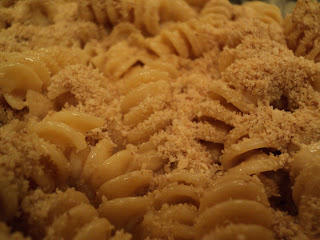 One last note on heat:

Since the milk and/or cheese will curdle if you let it get too hot, this means curdling is nearly inevitable when you microwave any leftovers. I'm just warning you. It still tastes good, it just won't be creamy anymore.

And since this entry was nearly devoid of nice colors, I am throwing in a bonus dish!

I love pickled beets. There, I said it! I think plain roasted beets taste like dirt (literal dirt. Earthy. Wet. Dirt-y.) and thus I really prefer the sweet and sour zip of beets that have been pickled. I made pickled beets on Earth Day on sort of a whim, but, you know, since they're so one-with-the-Earth anyway it seems pretty appropriate, right? And they are so goldarn beautiful! There are golden varieties, candy-striped varieties... sometimes I can't stand how lovely beets are. 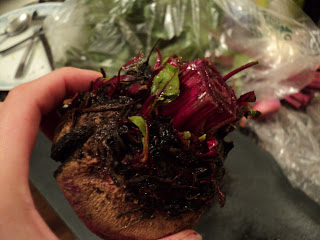 I halved the beets and put them in a foil packet with a shallot and some fresh rosemary. 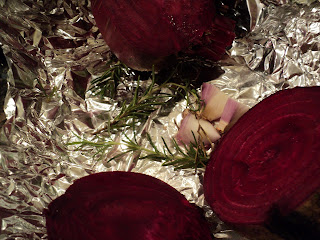 And then I cooked the packet in the oven at 400° for an hour.
People who regularly cook beets will tell you that the skins slide right off afterward. I didn't cook them for quite long enough because I was impatient. Thus, skin removal was a real pill.

Anyway, I peeled them and cut them into pieces, then moved them to a big glass bowl to cool down. When the beets were still roasting, I made the pickling liquid out of 2c water, 2c vinegar, 2c cane sugar, and a sprinkle of dried tarragon. I chose tarragon because Alton Brown's recipe for pickled beets calls for "tarragon vinegar." Also, most pickled beet recipes call for apple cider vinegar rather than white vinegar. ...I didn't have apple cider vinegar, so I used white, but I cut it with a little rice wine vinegar, thinking that would "soften the blow." I cooked all these items together in a saucepan until the sugar was dissolved, and then I cooled it down.

Finally, I poured the liquid over the cut beets, and I threw in a halved garlic clove or two. I'm going to let this sit, covered in the refrigerator, for five days before eating. I can't wait! I'm saving the lovely beet greens for a greens 'n' tomato toss later this week.