This past Sunday was a Major Cooking Day. After a few days of low-maintenance meals (Aidell's andouille, pizza out), I wanted to challenge myself a little. The pantry was looking pretty sparse, though, because we only go to the grocery store once a week and we were right at the end of the week. We had two chicken breasts and some bacon in the freezer, half a container of smoked blue cheese crumbles, and the normal pantry items like.. flour, sugar, Baker's unsweetened chocolate. I chose to try out a Claire Robinson recipe for blue cheese and bacon-stuffed chicken because her whole Food Network schtick is "five ingredients or fewer." The recipe says to make a compound butter with bacon and blue cheese, chill it, slice into medallions, and slide the butter under the chicken skin before roasting in the oven. I more or less kept to the recipe, halved, though my chicken was skinless so I butterflied each breast, stuffed them, and used toothpicks to keep it together. I also used green onion rather than chives.

I didn't fiddle with the compound butter business as much as she recommended. That is, I still made it as directed:

But I kept it as a shmear rather than chilling it and cutting it into medallions. Though I'm sure that would be amazing for other applications.. like a dinner party. On a steak or a potato! O M G.

More after the jump... 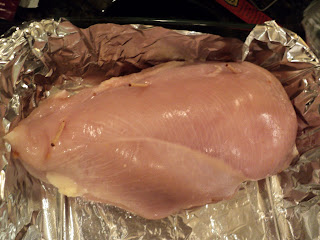 Above is the breast after I folded it over and secured it with three toothpicks. Yes, this is a big mamma jamma---that's an 8" glass casserole dish. Part of our "budget cooking" is surrendering the organic, free-range stuff on most occasions. So.. that's one huge, huge piece of laboratory chicken. I'm sure we'll return to the more respectable stuff once we have jobs.

I browned the chicken before baking because pale chicken is super depressing. However, as you can see, I'm completely bonkers for the Maillard reaction, and I may have gone a little overboard. Someone (me) got distracted with Captain's Log: Part Two items that the chicken got kinda burned. Okay, a lot burned.
That said... it looks good, right? Browned stuff looks amazing! The browned parts did not, however, taste too great. Whatever lesson learned get off my back okay???

Here's an insider peek.
Conclusion: It was good, but not great, in large part due to problems with execution (way too big of a chicken breast, burned, butter seeping out). If I were to do this again, I may just do cheese/onion/bacon only, with no butter, and I think those items would work better as a topping than as a stuffing. How does one even eat a stuffed chicken breast, anyway? It's packaged as "fancy chicken" in restaurants but I believe you could get much better flavor and improved eatability by putting all the delicious add-ons on top, then broiling it at the end so the cheese gets browned and bubbly.