also we got married seven days ago

This recipe is one of several that gets me thinking about Dutch-processed cocoa versus regular cocoa. You know how the Dutch stuff pops up every now and then? How Oreos are a darker brown than other chocolate cookies? Dutch-process cocoa has a reputation for being "better" and having a truer chocolate flavor, or something. I think technically it's just cocoa that has been treated with alkali and that the pH has been affected by the process... something something baking powder not baking soda, or vice versa, for effective leavening. (Better internet explanation here.) I don't ever see it in grocery stores, though, so maybe it's just not a "common people" sort of ingredient? Anyway. I spotted a carton of a Dutch/regular cocoa blend at the store and thought I'd give it a try. Photo here: 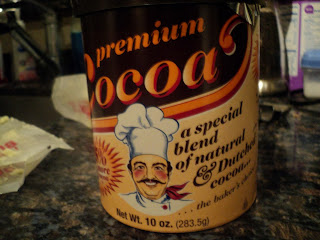 I got the ice cream sandwich cookie recipe from Smitten Kitchen, as I do so many others. Here it is, for your convenience: