I've been making brownie pudding for a few years and I can tell you it's pretty much the best dessert on the planet. It's very simple to make and the result is just like an underbaked brownie---fudgy, dark, gooey in all the right places... but it's safe to eat! In a way this behooves chocolate lovers on a diet: It's so rich, even the smallest serving can satisfy a craving. And it's almost flourless.

I started making this about four years ago (!) when we lived near the Huntington metro station in Northern Virginia. Once I even made a double batch for a picnic party hosted by my co-workers at the time. That's right, my co-workers from Restau. Eve, one of the top eateries in the nation. They loved it and devoured every sporkful. I haven't made it in a year or so, for dietary (read: caloric) reasons, but I've been making and giving away so many goodies lately and it was starting to break my heart a little. Save me, brownie pudding!

The recipe comes from Ina Garten and the Food Network... while I do make a few adjustments to the recipe, I am mostly faithful to the original.

Here's the recipe as I make it:

I start by preheating the oven to 325° and melting two sticks of butter in the microwave.
Pro tip: use the wrappers from the butter to grease the baking dish.

Then I whip up the four eggs with the sugar until they go from this... 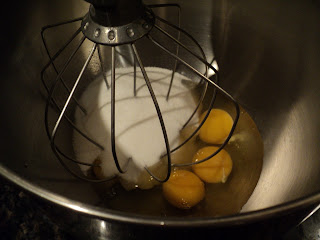 to this...
....to this!
You're looking for pale yellow color, voluminous texture, and the mixture should fall back on itself in ribbons when you lift the mixer/beaters. See the little "pile" under the spatula? This takes a few minutes, but it's worth it! (**See Note, below)

While the eggs are beating, I mix the cocoa powder and the flour. Sometimes I sift this, sometimes I don't... I think this time I should have sifted because the batter ended up with small nobbins of cocoa powder in it. Probably not a problem. But, it bugged me all the same. So: sift the flour and cocoa powder, people! 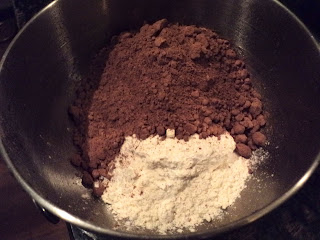 Once the eggs are fully whipped, I add a pinch of salt, a teaspoon of vanilla, and this time I did a splash of peppermint extract. Mix them in. Then I slowly added in the flour/cocoa mixture. 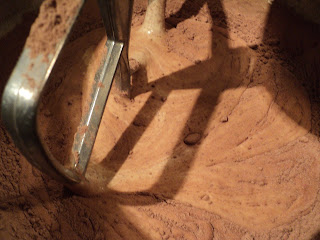 When the cocoa and flour are fully incorporated, I folded in the melted butter, and that's it!
The final step is to pour this in a dish (I use 8x8 glass) and then place that dish in a larger dish.
Place the dish(es) into the oven and pour hot water into the larger dish until it comes up about halfway. Bake for 50-60 mins at 325°, or until a toothpick comes out 3/4 clean. The finished stuff will be kinda gooey, so, I mean, don't stress out over this toothpick business.

Let it cool a little, then scoop it out and prepare for the most amazing moment of your life. Or, you know, top twenty. 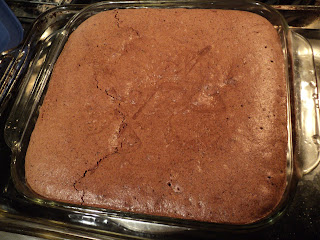 Note: It doesn't actually rise as much as this photo suggests. Because I whipped mine up so much, the batter had a lot of air in it and there was this layer of crackly crust (see below) which set about 1/2" above the rest of the brownie pudding. Interesting, eh? Note the crack running down the middle. It gave way fully a couple of minutes later, revealing the aforementioned air pocket.

The lesson? Maybe don't whip it up quite as much? This was my first time making BP using a mixer. In the past I usually did it by hand and, surprisingly, I think that yielded better results!

This was still plenty delicious though. This was a corner piece and thus less fudgy than the more interior parts. It looks dry, but see how the BP clung to that spoon? It has a very nice, soft, melting texture.
Posted by Lenore