Lest you think I'm cooking only sweet things

When 30 Rock went off the air, we had a farewell party. I made some of the foods Liz Lemon was always talking about, and we ate them in her honor. We had ham, we had cheese (in the form of this... HIGHLY RECOMMENDED), and, well, while I'm at it you all should just watch this. We did have vegetables, too, but that aspect of the meal does not make for interesting blog fodder.

What a lot of links! I am a millennial, you know. Technically.

Anyway! I also made us pretzel rolls to go with the ham, lifted from Smitten Kitchen. They were a bit of an ordeal, but homemade pretzels of any sort are an interesting novelty and so I thought I'd try them again for the blog.

Here's the recipe, adapted to suit my needs:

First I put the salt, sugar, and yeast in a bowl.
Then I added the flour and mixed.

Next comes the water. For those of you unfamiliar with working with yeast, you're looking for water that is warm, but not hot. Ideally it should be the sort of temperature that, when you stick your finger in it, your thoughts run precisely thus: "Ow that's a little warm but oh no it's fine." Sort of like bathwater. But bathwater is a bit ambiguous, no? About the same as my finger trick, you say?

This is defined in the recipe as 125° to 130°, for the precision nerds out there. Then you stream the water in slowly and mix with a wooden spoon. When it starts to come together, get your hands in there and make it work!

Here I am doing exactly that, demonstrating dough which is "a little too sticky:"
I just added a little more flour (sprinkle, mix, sprinkle, mix) until it was still somewhat tacky but definitely under control. Tidier people will tell you to then transfer the dough to a clean bowl, pour a little oil over it and roll the dough around to coat, and then set somewhere warm to rise. I just added the oil to this already messy bowl, and (just as I was taught), I put a damp kitchen towel over the bowl to keep things humid. I did place the bowl somewhere warm and I let the yeast do its job for about 45 minutes.
It's done when the dough has about doubled in size and when, if you poke it with a finger, the indentation does not spring back. Note the finger dip, above.

Then I rolled the dough around some with a strong hand, just to deflate the air, and I moved it to a lightly floured piece of parchment. I shaped it into a rough rectangle for easy division. 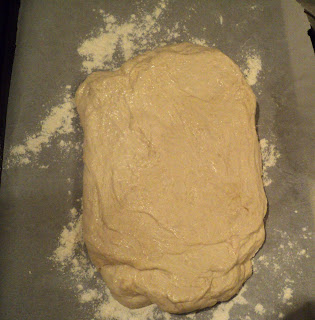 I used this convenient shape to divide it into eight sections which were approximately even. Pro tip: Flour the knife before each cut to prevent sticking. 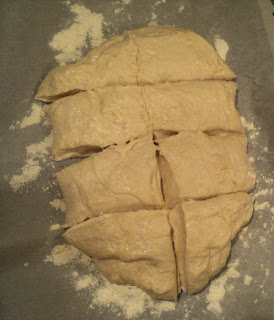 Then I shaped the sections into balls and spaced them out on that same section of floured parchment. If the sizes are a dramatically uneven (as was the case for my top left piece, above), pull a little dough off another piece and add it to the weakling. You the boss. 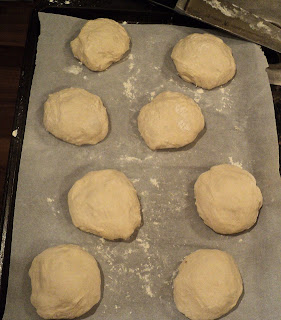 I spaced the dough in this way because I thought I was maximizing the space for rising. Set aside the dough (again in a warm place) for 30 minutes or until doubled.

I made a mistake here. Head's up!

The next step involves pulling the dough balls off of the parchment and boiling them in some water. How does one pull wet dough off of parchment without a) sticking and b) completely deflating all that air from the latest rising? Good question! I didn't think of this. I would recommend you grease the parchment, or better yet don't use parchment at all. What you need is a surface which allows you to pick up the soft dough with as little resistance as possible. OMG greased oversized muffin tins??? Regular size tins for smaller rolls?? Amazing idea, Lenore. Readers: Try this and tell me if it works.

Anyway there's your foreshadowing for some level of disaster to come. Onward and upward. Here's a shot of the pretty pudgy babies post-rising:
This next step takes a lot of attention and is kind of messy. I recommend creating a safe space for oneself (which means announcing to anyone else in your home, "Don't bother me for the next five minutes! Intense kitchen-ing in progress!"), prepare your work space, and take a sip of iced Crystal Light Fruit Punch for fortification. Preheat the oven to 375°.
Then I set exactly eight cups of water to boil in a large pot. I added 1/4 cup baking soda and 2 tablespoons sugar.
Then, basically, each dough ball has to boil for 30 seconds a side. Yikes! It's simple, but when working with dough, boiling foamy water, and a timer... it's kinda stressful. Get a slotted spoon for easy scoop-outs. Stay focused. It's just food.

Here's where I had some problems. The dough balls stuck to the parchment paper (key word is PAPER), and they deflated completely when I had to pry them up. See the size differences here, based on my success/lack of success in the process of prying?
My concern was that, if the dough was fully deflated, it would be dense and tough after baking. I'm not sure this was a correct anticipation. I mean, they're being boiled for goodness sakes. The dough was going to undergo some trauma regardless. I ended up either pulling the dough up super fast and chucking it in the water OR pulling it up slowly, watching the air leave the dough, and then carefully reshaping into an albeit smaller sphere. Ultimately I concluded the latter process was better than being pried up and hastily thrown into the pot, shaping be damned, in an effort to preserve the air. We're talking small and possibly dense spheres versus large, flat, and possibly fluffier disks. Who wants a pretzel disk, anyway?*

* I had plans to make ham-and-swiss sandwiches out of the rolls, so I needed some volume. Technically a pretzel disk is perfect if you're only in it for the pretzel.

Anyway, here's a close-up of the boiled dough:
When they're all boiled and you've made your peace with what has happened, it's time to prep them for the oven. I swapped out my parchment and proceeded as usual. I brushed each roll with egg white and I gently cut an X in the top of each roll. The trick is to drag a serrated blade over the top---don't push down. I sprinkled kosher salt over each one, getting it all inside and around the X, and then it was time to bake. 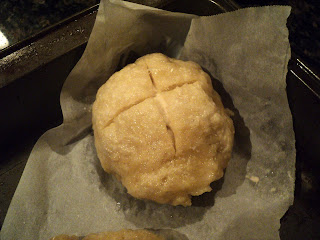 20-25 minutes at 375° and they should be golden and lovely.
As mentioned above, my plan for the rolls was to make ham and cheese sandwiches. Thus: I just used "deli cut" ham from the grocery with pre-sliced swiss cheese. Swiss is a classic choice, but I'll also add that there is something about melty swiss cheese which, to me, is always so much tastier than expected. I brushed one side of the roll with dijon mustard, which could just as easy be dijonnaise (add some mayo). Then I broiled the sammich in the toaster oven until the cheese met my specifications.
I chose one of the small, cute rolls. Portion control! Also, this was one of the ones which I was concerned would be overly tough because it "deflated" when I pulled it off the baking sheet and tossed it in the hot tub. The verdict: Fears unfounded. It was soft and malty and perfect. I still recommend finding a better method for easier dough ball management, but all in all it was not a disaster. It's really neat that this recipe has so few ingredients, and yet it still tastes distinctively like a pretzel! Conclusion: for a lazy Sunday, these were absolutely worth the effort.

NB: Since there is salt on top of these, they'll only get tougher and dryer as the days pass. They can be refreshed in the oven/toaster oven, but I suspect we'll be looking at hockey pucks by this time tomorrow. So: Don't double the recipe unless you know most all will be consumed within the first day or two! Or perhaps one could experiment with baking without the salt, then add the salt to taste later. (Use water to make it "stick.") (I've never tried this.)
Posted by Lenore