Another chicken dish I like to make for us is balsamic marinated chicken which I top with mozzarella and then broil for added deliciousness. It is similar to the zesty chicken thighs but it has a few key flavor changes, boneless and skinless chicken, and more cheese.

I start with whole chicken breasts and I cut them up according to my whim. Strips are a good choice, as are "nuggets," or even pounding them into thin cutlets. I cut them extra small this time around because I didn't have much time for marinating, and I knew the marinade would work its magic faster on smaller pieces.

Then I prepared the marinade right in the pan I planned to use for cooking the chicken. Ingredients for the marinade are:

I like shallots because they're a particular kind of purple lovely and because they "melt" better into dishes. That is to say: onion takes a while to cook and soften to a point where it's not a distracting texture. Shallots give way much faster, resulting in a more uniform final dish. I've tried this dish with red and/or yellow onion, and while it tasted good, the onion didn't cook enough for my taste. One could pre-cook the onions in a skillet, or just use shallots. They're cheap AND highbrow! How often does that happen, hm?
You'll also need:

To marinate, I pour a fair amount of balsamic vinegar (in a 9x13 dish, the vinegar came up about 1/2"), a sprig of rosemary that has been finely chopped, sliced shallot, 2-3 cloves grated/minced garlic, 1tsp salt, some black pepper, few dashes of Worcestershire sauce, a sprinkle of dried oregano, and splash of olive oil. Toss to coat. 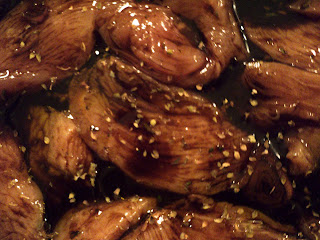 I let this marinate as long as I can stand. (Ideally 3-5 hours.) You can do this in a bag in your refrigerator overnight, even. Then I bake it at 375° for 15-20 mins. I'm looking for "fully cooked" or maybe "almost fully cooked."
Pour all that cooking liquid into a cup/bowl/saucepan for later (optional) use. Then comes the fun part.

While you prepare the vegetable side dish and change your oven settings to "broil," ask the sous chef to cut some fresh mozz into thin slices. Then you cover the chicken as best you can with those slices.
Then I broil the dickens out of this lovely mixture until it meets my specifications for "browned and bubbly." (At least five minutes. Probably closer to seven or eight.) This is why it's okay if your chicken is not cooked all the way through. Heck, it's better if the chicken is underdone because it reduces the odds that you'll overcook it via broiling.
Hot tip: See how, in the top cheesy picture, there's all that liquid in the pan, despite our having poured all the cooking liquid out? This is because fresh mozz has a lot of water in it. Perhaps this could be fixed by using part-skim mozzarella, rather than fresh. I've never tried this because I keep forgetting about it.
This is a fun dish because the chicken gets "dyed" by the vinegar, so there are some interesting colors going on. The balsamic is also a good choice because it has some sweetness and richness to it that other vinegars don't.

As for that cooking liquid we poured out pre-cheese: For bonus points, while the cheese is melting, you can pour the liquid in a saucepan and reduce it until it's a thicker, more flavorful sauce. Then use it for dunking. I've never done this because I'm not hurting for bonus points, but, you know, I may try it sometime.
Posted by Lenore