We all knew my "light cooking" efforts would not last very long, didn't we. Healthful living is all about portion control anyway, right? Right? And we exercise a lot. Whatever dudes food is delicious!


I'm always on the lookout for dishes I can make for us which will last several meals, be relatively inexpensive, and ideally not pasta/potato/bread-centric. Meatloaf fits that bill, though it has its own shortcomings, namely a) It's a mess to make; b) it's not exactly beautiful; c) one of the patrons at Chez Lenore is not a huge fan of ground meats. Understandably. Thankfully I've found a recipe/method which we all enjoy, so points a) through c) can be overlooked from time to time.

So here we go: Meatloaf!

I started with Ina Garten's recipe, with some adaptations. She recommends 2.5 lbs of meat and THREE onions, which just sounds crazy to me. I've downgraded to just 2 lbs (...) and I use two different types of beef to comprise the whole. That is, I get one pack of high-quality, very low-fat meat (91% lean or higher), and then I get a second pack of fattier meat (85%) since there's no denying the role fat plays in making food taste good. I also like to use fewer onions, but I add carrots for vitamin A as well as color.

Here are the non-meat ingredients:
I like to take the meat out of the refrigerator so it will be less cold when it comes time to handle it. Freezing meat hands are pretty much the worst. Then I chop up the onions and carrots and thyme and throw them in a skillet with a little olive oil. I also add the 2 tsp salt at this stage to help the vegetables soften. (This may seem like a lot of salt, but the vegetable mixture will be flavoring the whole dish, which will be something like eight-to-ten servings. Don't skimp!)
Then I let the onions etc. cook for a while, Ina says 8-10 minutes but I didn't exactly time it. Just let everything soften and cook down.
Then I add the Worcestershire sauce, tomato paste, and chicken broth. Use leftover broth to cook your peas. If you're serving peas alongside. Which I highly recommend. Anyway mix well, turn off the heat, and let the onions etc. cool down a bit.

While it cools, I prepare the other items. Quick note: A lot of recipes which involve ground meat advise: "Don't overmix! Don't pack it or squeeze it!" In this spirit, then, I like to mix everything but the meat ahead of time so there will be less hands-on action once the meat is added. This way I am effectively mixing just one component with the meat, rather than many separate components. Ya dig?

I beat two eggs in a large bowl and then I pour out.. eh... about 1/4 of it. Why? Because Ina's recipe involves two extra large eggs and calls for 2.5 lbs of meat, but I'm only using 2 lbs. I don't want the meatloaf to be like a brick, which is what I fear too much egg will do. So I pretty haphazardly compromise by getting rid of a little bit of the egg. This might be silly and unnecessary. But, it happened. Then I add the 1/2 c breadcrumbs to the large bowl and, if the onion mixture is cooled enough that I trust it won't cook the egg, I go ahead and add that as well. Mix well with a fork.
Once everything is mixed nicely, I add in the meat. See the two types?
You can try to do this with a fork, or two forks, but I feel most satisfied with the final product if I get my own hands in there. Of course, be sure your hands are super clean! Just ignore that nail polish. You're imagining things.
Then shape it into a loaf...
Then Ina says to top it with ketchup. I live with a BBQ sauce maniac, so we do 50/50. 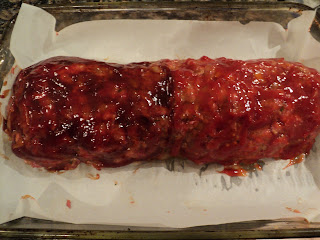 I baked this at 325° for about one hour and fifteen minutes. Ina Garten says you can prevent the top from cracking by placing a pan of hot water in the rack below the meatloaf. I didn't remember this until it was too late, as you can see. I turned the meatloaf midway for even cooking, and I sponged up some of the drippings as well... mostly because I like tidy food and puddles I simply cannot abide. It's finished when the interior temperature reaches 160°.

Then let the meatloaf cool for a few minutes before slicing so that a) the juices can redistribute, and b) it'll be easier to slice. I did not wait long enough, hence the quasi "meat pile" below. 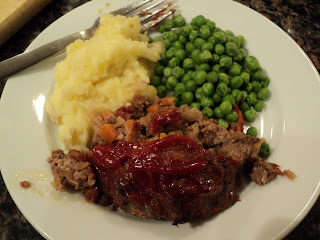 I like to mix peas with potatoes and dunk the meatloaf in dijon mustard. Again, Lunch Lady style. Food slurry. Edwin keeps it all separate and enjoys extra BBQ sauce with his.


Quick note on the potatoes:

I cut four fist-sized yukon golds into even pieces, then added them to a pot with cold water, some salt, and a smashed garlic clove. 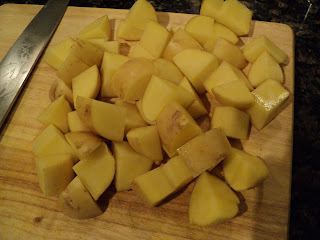 Boiled until just tender (10 mins?), then I drained them, leaving a little of the starchy water in the bottom. I picked out the garlic clove and then I mashed them with a potato masher. I added a few splashes of 1% milk, maybe a tablespoon of butter, a little grated parmesan, and some olive oil. All of these items, plus salt, can be added to taste until the desired texture is reached. The olive oil may be a surprise ingredient, but if you think about it, mashed potatoes always have some kind of fat added to them (milk, cream, butter...) so the OO is simply another variant. Anyway it's awesome. As you can see, I didn't bother to peel the potatoes, nor do I try for a perfectly smooth consistency. It's nice to have some texture sometimes, y'know?

This all made quite a bit of food which we're still working on several days later. I would also call a dinner like this a "Dessert Preventative" because it is so satisfying. Success all around!
Posted by Lenore