Pulled pork is one of my favorite foods. There, I said it. I nearly always order it when I go to BBQ restaurants, and the version out here has been bothering me because it is so, so cumin-heavy. Maybe this is a Western US thing, since we are closer to the Southwest and/or Tex Mex regions? Anyway, I suppose some things we just have to do ourselves!

A few notes on technique: I cook this in my slow cooker. I know this next statement is controversial, but I don't brown the meat before braising it. I know. Shocking! It just makes a sputtering stovetop mess, and I find the results are completely delicious even without this step. If I were cooking for a food critic, or the Queen of England, I might brown it first so I could lay claim to the "nutty dark complexity" that such a step can provide, but, you know. It's just us. I also know a lot of die-hards in the South will insist you must smoke the pork. This is probably true. However I live in a 600 sq. ft. apartment in a city, and it's just not something I do. Yet? Smoked paprika or liquid smoke are acceptable replacements for me, for now.

I start with a pork roast. The most delicious pulled pork comes from the shoulder ("Boston Butt") because it's dark meat with a lot of marbling. You can make passable pulled pork from other, less fatty cuts, but it'll be a lot leaner and thus less silky and tender. You also risk having "dry" meat, which can be fixed by adding more sauce to compensate, but.. considering how much sugar is in BBQ sauce, you might be better off starting with the fattier meat? Just saying. Lean white meat BBQ, for me, fails to scratch the itch. Once more, I do try to find a roast with a bone in it since that will help with both flavor and texture.

Here's what I got: 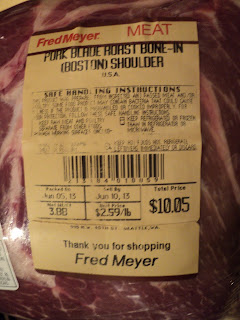 When I make pulled pork, I usually start with "the base" of things which I want in my crock pot. 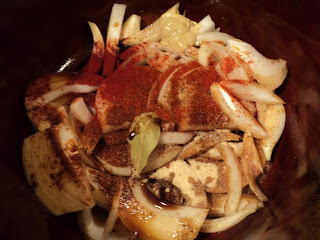 This is one Vidalia onion, sliced, with a Whole Buncha Stuff thrown on top. That stuff includes:
I tossed those things around, and then I turned to the meat. As mentioned above, I like to cut some of the fat off. Not all of it, just the larger sections. I do skim the sauce at the end, so this is just saving me effort later on. When the meat is ready, I get working on The Sauce. Here's the basic cast of characters:
If I had instant espresso or coffee powder, I would have added that too. Same for a can of tomatoes.
Then I unceremoniously dumped a bunch of brown sugar and garlic powder on top. 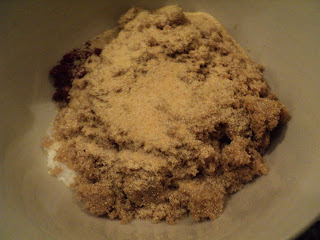 I stirred this up, then added my liquids (cider vinegar, splash soy, splash Worcestershire, splash bourbon, dollop molasses, a squeeze of mustard). Black pepper too. North Caroline BBQ is my favorite, so the vinegar and pepper are nods in that direction. 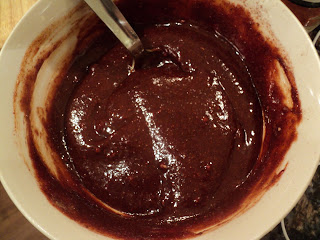 I know, it's all very imprecise. I basically am looking for a thick, rich sauce, which tastes good. Pretty ambiguous, right? If you like, you can start tasting it to see if it's the right amount of sweet smoky zip for your palate, but honestly I like how it tastes different every time, and I Trust the Pork to even everything out in the end.

Then I smear the sauce all over the pork and add it to the crock pot. 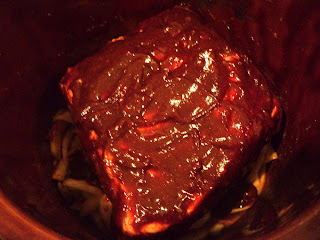 Sometimes for good measure I will add another splash of vinegar to the pot, but it really doesn't need to be all that "wet." There's a lot of water in the onions and the pork, and of course we want a thick sauce in the end, so.. less liquid the better. I cooked this on low heat for no fewer than five hours, probably more like six or seven. I flipped the meat after about three hours so all sides had even exposure to the onions and other stuff in the pot.

I could tell it was done when it was pretty much falling apart to the touch. YUM. I pulled it out best I could:
And I let it sit and cool for a bit while tending to the sauce. I poured all the liquids into a saucepan and, as always, was surprised at how much there was. I'm guessing three cups? I reduced it by about half, then tasted it to be sure it was right. Normally, if it's not quite thick enough, I will add some cornstarch or flour to tighten it up. I didn't need to to that this time.
I scooped out the onions and some of the sauce, and moved it to the glass dish I'll use for serving/storing the pork. 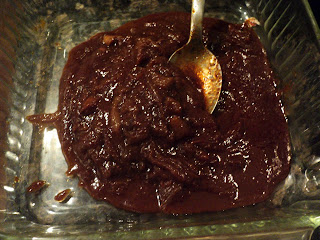 By this point the meat was cool enough to handle, so I got in there and pulled off as much of the skin/fat/bone/other misc. inedibles as I could. As much as I love rich fatty foods like this, I really don't enjoy biting into the actual fat, so I discard all of it. If you are not as particular, leave it in! Next is a stylistic choice: the pork could be cut into chunks. It could be shredded into tiny sauce-holding threads. I went with large morsels because my fella requested it, but come to think of it I always appreciate that in restaurants, if they leave it in larger pieces. Thus, I present to you an amazing sight: 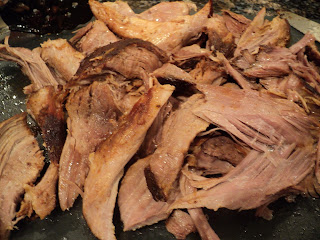 I gently moved it to the dish holding the sauce and onions and I tossed it all together, taking care to preserve the pieces. I added a little extra sauce for good measure, and then we were done! There was extra sauce to serve on the side. This is perfect for sandwiches, or even just on a plate "platter" style. We had it with asparagus (of course) and toasted buttered bakery bread. Strawberry rhubarb crumble for dessert.

BBQ pork is often served with cole slaw or some other cool, tangy side dish. Such an item would definitely be good here, though I will say: the zippy tangy sides are meant to cut the richness of the meat, right? To offset the super sweet thick sauce? For those of us who like zippy tangy not-as-sweet BBQ sauces... maybe such an addition isn't so necessary?
Ain't nothin wrong with that.
Posted by Lenore