Hi everyone! Remember me? I had a baby in July…. 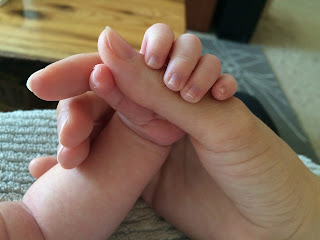 …..and since then, well, cooking has not been a priority. I do still cook, but not in the slow, methodical, "let's document this on the internet" kind of way.

But I haven't forgotten you! I photographed a recent cooking venture as an example of the sort of meal you can prep ahead of time, bake in the oven with minimal fuss, and then continue to enjoy it for a few days. So I present to you…

or "meat salad" as we lovingly refer to it. 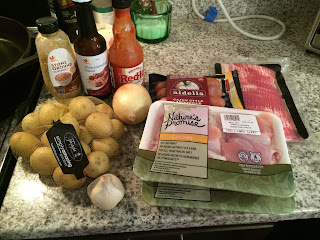 I start by setting out two pans: a 9x13" glass casserole dish and an 8x8" dish. This makes a lot of food!  If you have a huge baking pan with edges at least 2" deep, use that! We're going to try and brown all this stuff in the oven, and you'll have better luck if the rubble is spread in a single layer, aka in a large pan or distributed between more than one pan. Make sense? You can also halve this recipe and just use one package of chicken.

Start by cutting up the chicken into bite-sized pieces. I don't know about you guys, but I've always been confused by boneless, skinless chicken thighs. The "grain" of the meat goes in all sorts of directions and it's hard to know how best to shape the pieces. Right? Anyway do your best with these mysterious cuts of meat. It's true what they say: thigh meat tastes better than breast meat, it stays tender longer, and it's way cheaper.
Then I throw the pieces of chicken into my two pans, attempting to be distribute proportionally for the size of the pan.

Then I cut up everything else! And throw it in the pans. 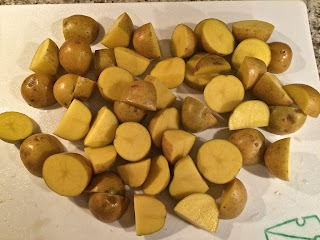 Sausage…
Onions, garlic, bacon…
Then I prepare a sauce of sorts. You can come at this a few ways, all of them loosey-goosey in terms of measuring. For example, I think a honey mustard sort of deal could be awesome. (Mix honey, dijon mustard, maybe some thyme, salt/pepper.) Or even barbecue sauce. (Bottled sauce or mix tomato paste, brown sugar, soy sauce, liquid smoke/smoked paprika, garlic powder, splash ketchup.)  Or you could make it "asian" with soy, ginger, and sesame oil. Heck throw in a little pineapple. Or maybe italian dressing! Lemon wedges! Sundried tomatoes! The idea is to mix some stuff together that'll coat the meat/potatoes and lend some flavor. The sausage and bacon contribute a lot on their own, but I've tried this both with and without a sauce and sauce is definitely better!

I prefer "zesty" and "a little bit mustardy". I like to use worcestershire sauce, hot sauce, olive oil, dijon mustard, herbs (italian blend, fresh rosemary) and maybe a teaspoon of smoked paprika. I also add some salt and pepper. As you can see, my mixture totaled about 1/3 cup*.

* After eating this batch, I thought "that could have used more sauce." So… maybe 1/2 cup is a better goal for this quantity of food. 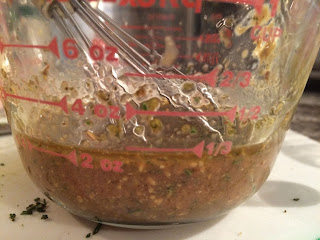 When it's ready, I pour the mixture over the meat/potatoes and mix it up with my hands. Then I spread everything out so there is as little overlap as possible. 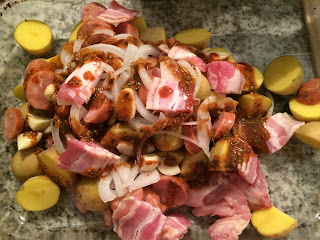 Now you can cover it in plastic and refrigerate until you're ready to cook it (maybe… 8 hours at most? Not sure of the upper limit here. Do not quote me.). This is a great way to go because everything sort of marinates. But, if you need to bake right away, this will still be awesome without the fridge time. 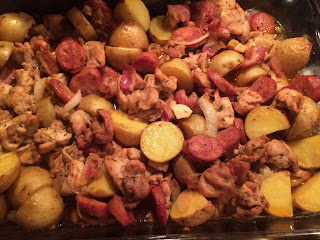 By now the meats should all be cooked, but the potatoes, depending on how large you cut them, may need more time. So taste a potato! Keep baking until the potatoes are tender. If it takes a lot longer than 45 minutes, maybe cut the taters smaller next time.

When everything is properly cooked, turn on your broiler for some awesome browning action!

I like to broil this for about 10 minutes (cook for 5, toss it, cook 5 more) or until everything looks browned and crisp to my liking. I did not photo-document this because while it was happening, I was actually on the couch nursing our little one, and I was coaching my husband through it.

Here's what a finished serving looks like:
Prepare a green vegetable for the side and you've got an awesome almost-one-pot meal that should cover your food needs for at least three dinners! Maybe more like six. Depends on the number of eaters and their appetites, of course.

What I like best about this meal is the versatility. All you really need is some meats you like, onion, and potato, and then dress it in flavors you like, then cook it up til it's ready. No pressure! No precision! 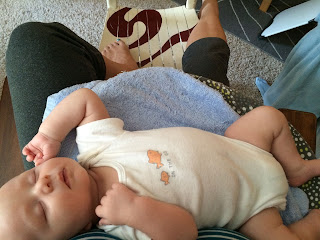