If there's one thing my fella loves more than Nutella, it's blondies. Or maybe frosting. I reserve things like blondies for special occasions because they are so rich and delicious, and it just so happened that a couple of weeks ago there was a special occasion. Time for a treat! For those of you not in-the-know, a blondie is sort of like a brownie in the sense that it's a chewy-fudgy textured-baked bar, however they don't have a chocolate base like a brownie. Blondies are, essentially, chocolate chip cookies in bar form. I found this recipe for Nutella-stuffed browned butter blondies a few months ago, made it once, and knew it was a real winner. They're oopy-goopy, sweet but not too sweet, and the browned butter, for all its annoying fad-ness, lends the bars an amazing butterscotch-caramel flavor which you just can't get from regular butter.

So here we go! The original recipe comes from The Food Charlatan and I'm pretty sure I made little-to-no changes to her method. I just took more photos.


The first thing I did was measure out the Nutella. The recipe makes 12 blondies, and each blondie needs a big glob of Nutella inside of it. Normally I would make a larger quantity with smaller portions, thinking that all my labor could stretch farther, but it's a bit of a pain to create and handle the globs of Nutella so for the time being I'm cool with capping this to only 12. So: using two spoons, place 12 globs of Nutella onto some parchment paper, supported by a baking sheet or plate or something. The globs should be about tablespoon-sized, but don't agonize over it. 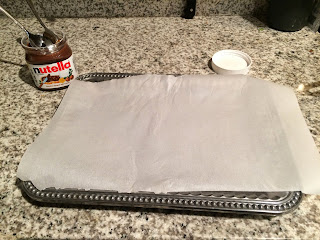 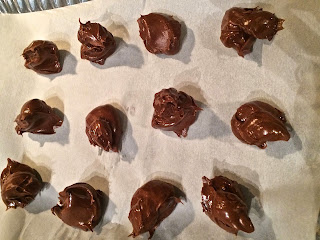 This glorious pan goes in the freezer for later use.

Then I preheat the oven (350°) and get to work on the browned butter. This is exactly what it sounds like: butter that is melted and then cooked for an additional period of time until the milk solids in the butter have caramelized, giving it a deeper flavor.

**BUT LENORE, CAN I SKIP THIS STEP AND JUST USE MELTED BUTTER INSTEAD?**
No. You can't. Not exactly, for reasons discussed below.
I like to multi-task, so while this melted, I prepped the cream cheese, cooking-show-style.
Then I checked on the butter…

And proceeded to measure out the sugar…
I also measured out more Nutella for later…
By this point I've used almost the whole Nutella container. 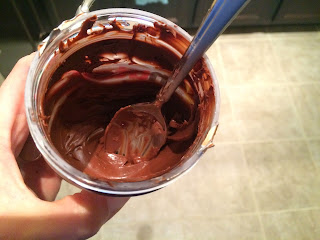 Which is okay because, honestly, a container of Nutella is the last thing we need laying around here these days.

Time for a butter check!
Once the butter is fully melted, I swizzle it around and/or stir it with a spoon fairly often to keep the heat even. Eventually the solids (what looks like foam now) will sink to the bottom and those suckers burn fast. So keep it moving, even as you multi-task. Having said that… at this point all that's left to do is Watch the Butter. Which might be just be the name of my memoir.
I removed the butter from the heat shortly after this photo was taken. It maybe could have gone another minute or so, but it's tricky because you don't want those brown bits to burn.


***LENORE, THIS TOOK FOREVER. I WANT TO SKIP THIS STEP. WHAT IS THE DEAL.***
Okay, Voice of Opposition, you've been very patient. You shouldn't skip this step because it makes the blondies amazing. Remember how I said this was a special occasion treat? Don't make it if you're in a hurry and can't invest in the process. That said, part of the browning process involves evaporation of the water which is present in the butter. You may recall this was 10 tablespoons of butter---that's one stick plus two tablespoons, or about 5 ounces. But look! Below is the finished browned butter. It's exactly 4 ounces, or the equivalent to one stick of butter. All that we did, really, is cook off water. So this is super-powered butter! Less watered-down! If you MUST skip this step, and I will definitely purse my lips if you do, just use one stick of butter and not the full 10 tablespoons.

…and for what it's worth, every brand of butter contains a different quantity of water (cheaper brands having more water).  So, like, skipping the browning is risky business, that's all I'm saying.
Okay, on with the blondies!

Mix the butter, brown sugar, and cream cheese in a mixer or a bowl or whatever vessel you have available to you.
Keep mixing this rubbled mess until the sugar is pretty well dissolved. The original recipe says "two minutes or until fluffy," but I like to kinda go crazy here and let her rip for longer. It helps, of course, that I have a mixer that can do all this for me. I'm sure I would handle it differently were I doing this by hand. 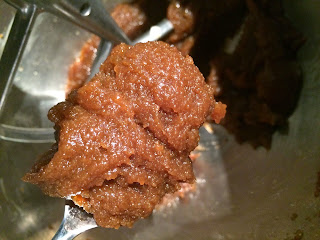 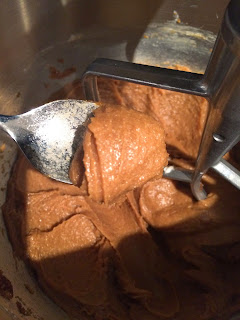 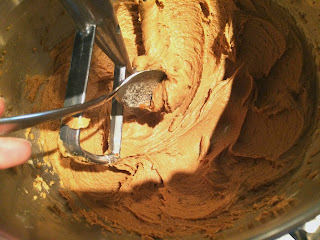 When the mixture looked like natural peanut butter and smelled like butterscotch, I said "wowza!" and  proceeded with the recipe, adding eggs and vanilla and mixing well.
Once the eggs and vanilla are fully incorporated… 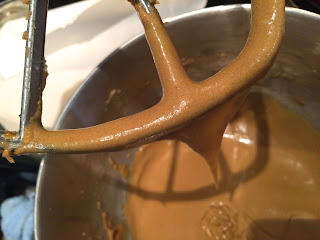 I piled the flour on top of the mixture and added the salt and baking soda to the flour, giving it a gentle half-attempted shallow whisk.
Mix these items gently, slowly, and stop when there are still a few lil flour streaks so as not to overdo it. 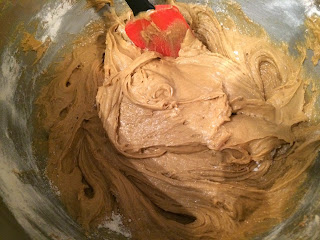 HOT TIP: remove about 1/4 of the batter and set it aside. You'll need it to bury Nutella nuggets. I've never tried this method, but I think it could work nicely…

Now it's time to add that remaining 1/4 cup of Nutella! We're going for a "swirl," so I like to dollop it over the top of the batter and only slightly mix it in. The next step is adding the batter to a 9" x 13" pan,  a process which in itself will do a little more mixing, so don't go crazy here. 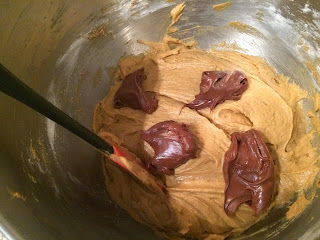 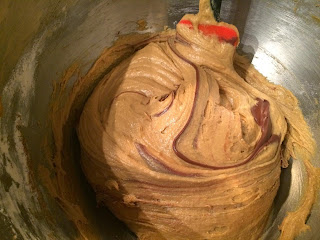 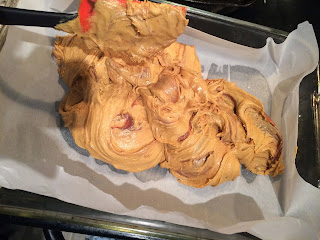 Now it's time to spread the batter out into an even layer and tuck away those delightful nuggets of Nutella which have been safely stored in the freezer. 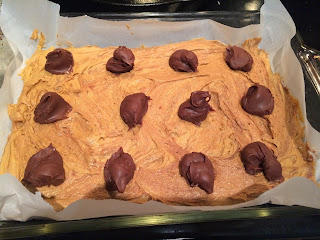 Now, the original recipe says to cover up the nuggets using the surrounding batter. I find this awkward and always wish I had set some batter aside for this purpose. So if you followed my HOT TIP above, go get that batter now and cover those suckers with it. Otherwise…
When they are all covered, it's time to bake. The original says to bake for 27-30 minutes, until the edges are set. She says it's okay if the center seems a little gooey. I got paranoid about this and maybe baked it for 35 minutes, but she's right: This mess will be a little gooey even when it's fully cooked, and that's okay! I think it has to do with the quantity of butter and sugar… the bars are very moist and soft. You have to let them cool completely before you can confidently pull a whole bar out of the pan. It's okay! It's worth it!

My finished product photos aren't as good as those in the original posting, where you can see the extent of the glop factor. 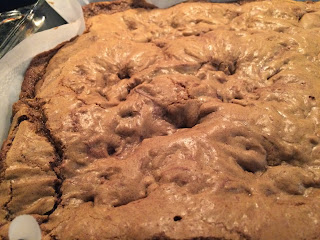 Look at this photo instead. She's a better photographer than I am… and I promise this photo is totally representative of the final product. Gooey and amazing.

You should make these the next time someone you love does something amazing. (Or if you just, you know, wanna.)
Posted by Lenore