As many of you know, I got married almost a year ago. Ten months, to be more precise. That means that nearly exactly one year ago, on August 2, I had my bridal shower.

I flew East to make final arrangements and to celebrate the wedding with my best gals in a very cool, very Old Virginia location. My sister was the organizer. She had this great idea to make the RSVPs into a recipe book---she asked each invitee to respond on a pre-addressed postcard and, whether the answer was yes or no, to contribute a recipe that she particularly loves so that I, the bride, might have a little something new to work with later on. At the shower I told the ladies that I'd blog their recipes… I'm sure by now they all thought I was lying.

But no! Last week, I received my recipe book, bound and ready! And I made one of the recipes! And I took photos!

This week's blog is from my mother-in-law. She says on the postcard that it actually comes from her mother, given to her by her grandmother, and that it originates in Women's Home Companion. What history! I just had to give it a shot myself. But first, a quick word on my mother-in-law: She has remarkable spunk and warmth and she set me right at ease when I first met her in… 2007, was it? Thereabouts? She has always welcomed me into the family, even in the early days, which was so valuable to the development of my relationship with my fella. She also models incredible strength and optimism, which I admire and aspire to possess myself. I'm looking forward to our return East, when we can all sit together on the porch and drink wine and snack on Sun Chips.

But on to the pie!

Here's the recipe, as printed:
I made a pie crust as described in my previous post (Blueberry Pie) and set it to chill in the refrigerator while I prepared the filling.
Something I love about many baked goods is the small number of ingredients. Just flour, sugar, salt, cinnamon, fruit, and butter, and you're good to go!

I mixed the sugar, flour, cinnamon, and salt together in a small bowl. 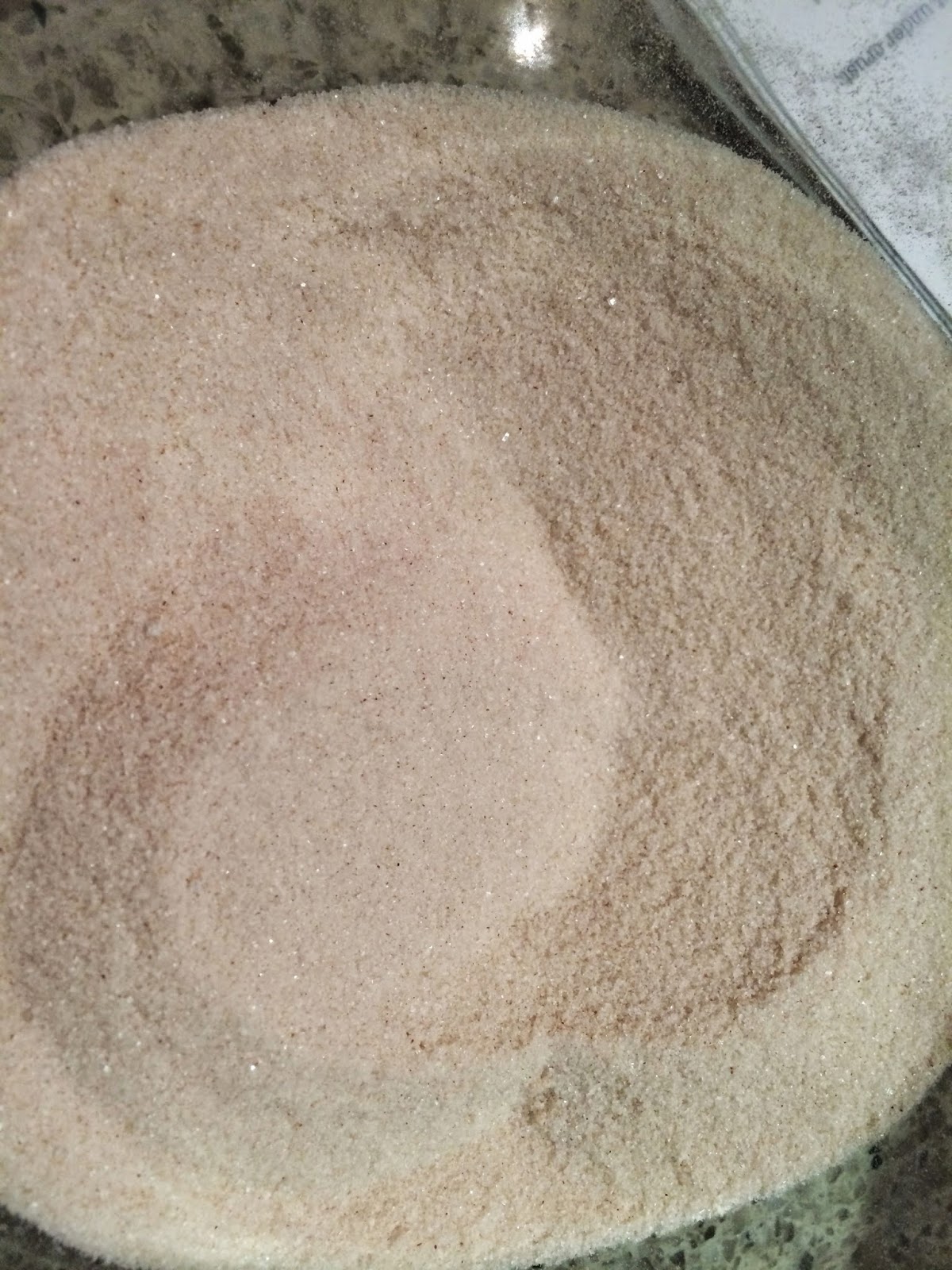 And I peeled/cut up the apples. The recipe says to slice them, but I think I prefer pieces of apple to slices. Easier to eat with a fork, right? Without pulling whole slice of apple out from the pie? Though I suspect sliced apples provide better structure and probably make cutting the pie easier. I don't make many apple pies, so this preference is definitely under construction.
I ended up using six large Granny Smith apples. Five probably would have done the trick, but, I mean, fruit's good for you, right? I sprinkled the apples with some lemon juice as I cut them up so they wouldn't turn brown. Though it occurs to me… if they're going to cook.. who cares if they turn brown?
Then I rolled out the bottom pie crust, put it in the pan, and added half of the sugar/flour mixture. 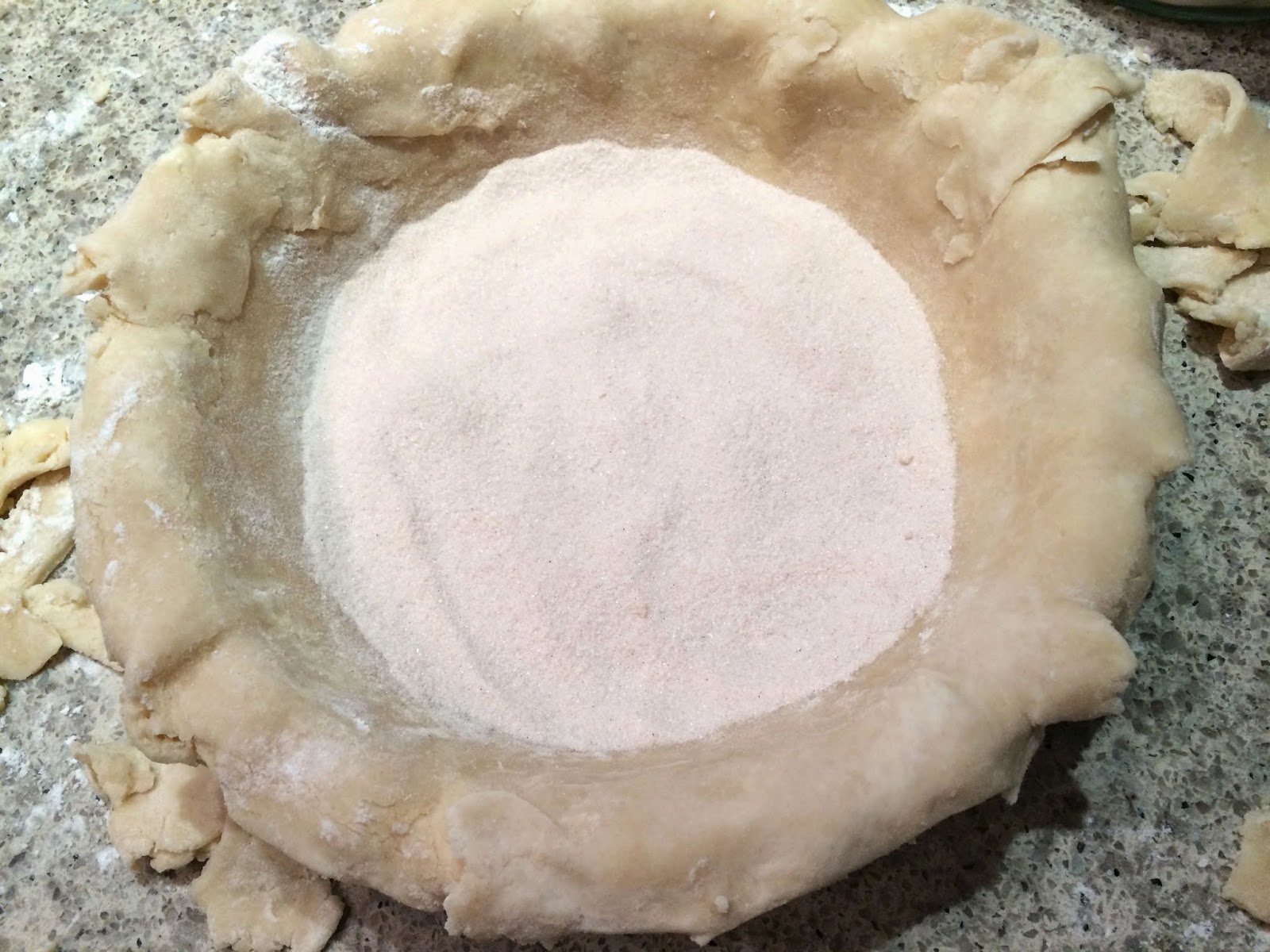 I've heard of this flour-under-the-fruit trick before as a method for soaking up fruit juices. Certainly seems easier than tossing the fruit in the sugar/flour mixture, right?

Then I added the apples to the dish and sprinkled the remainder of the sugar overtop. 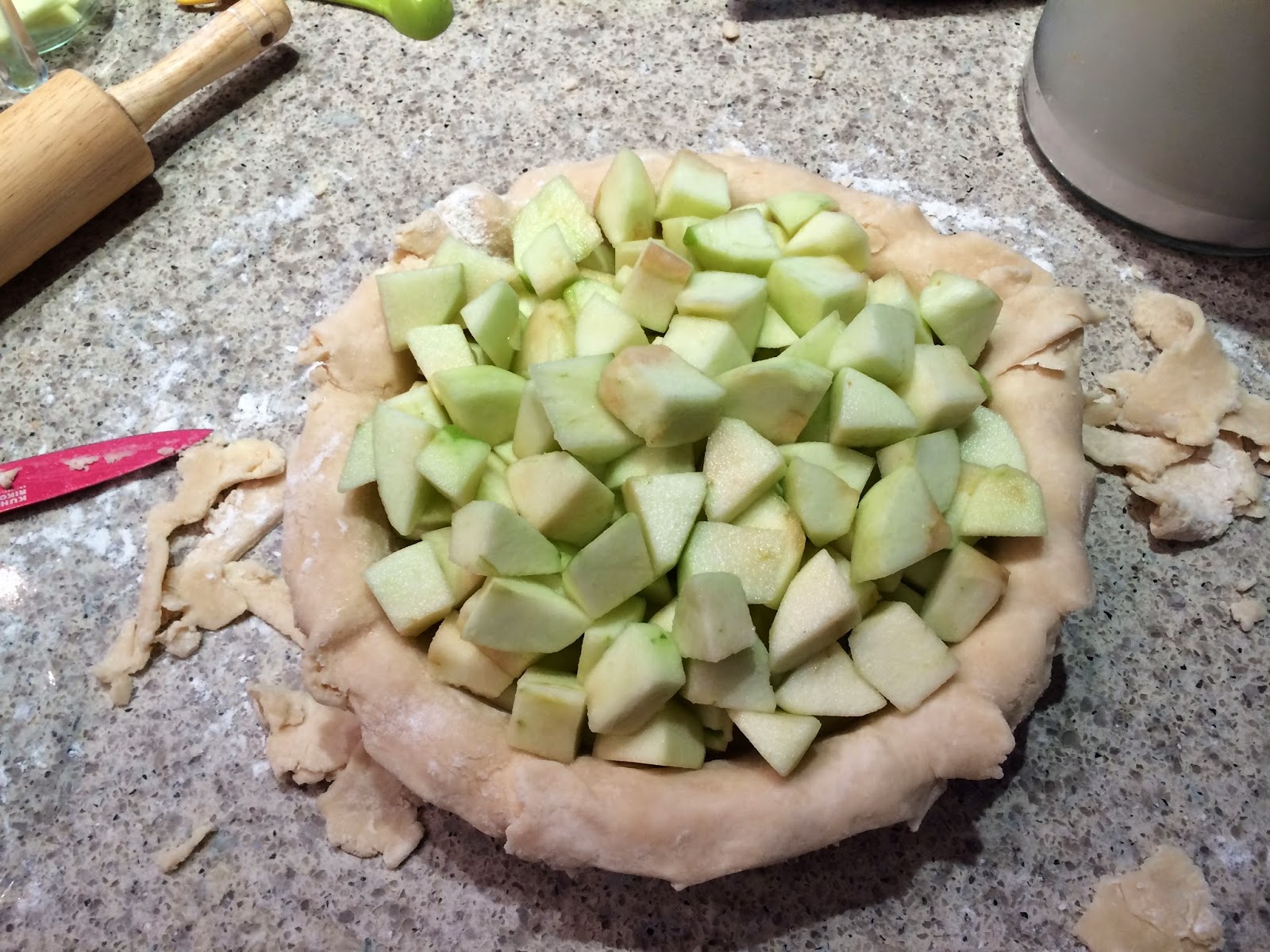 Then dot with butter and sprinkle with 1-2T of lemon juice. (The recipe says 2T, but I had already added a bunch of juice to the apples before adding them to the pan so I was a little more conservative come this stage.) 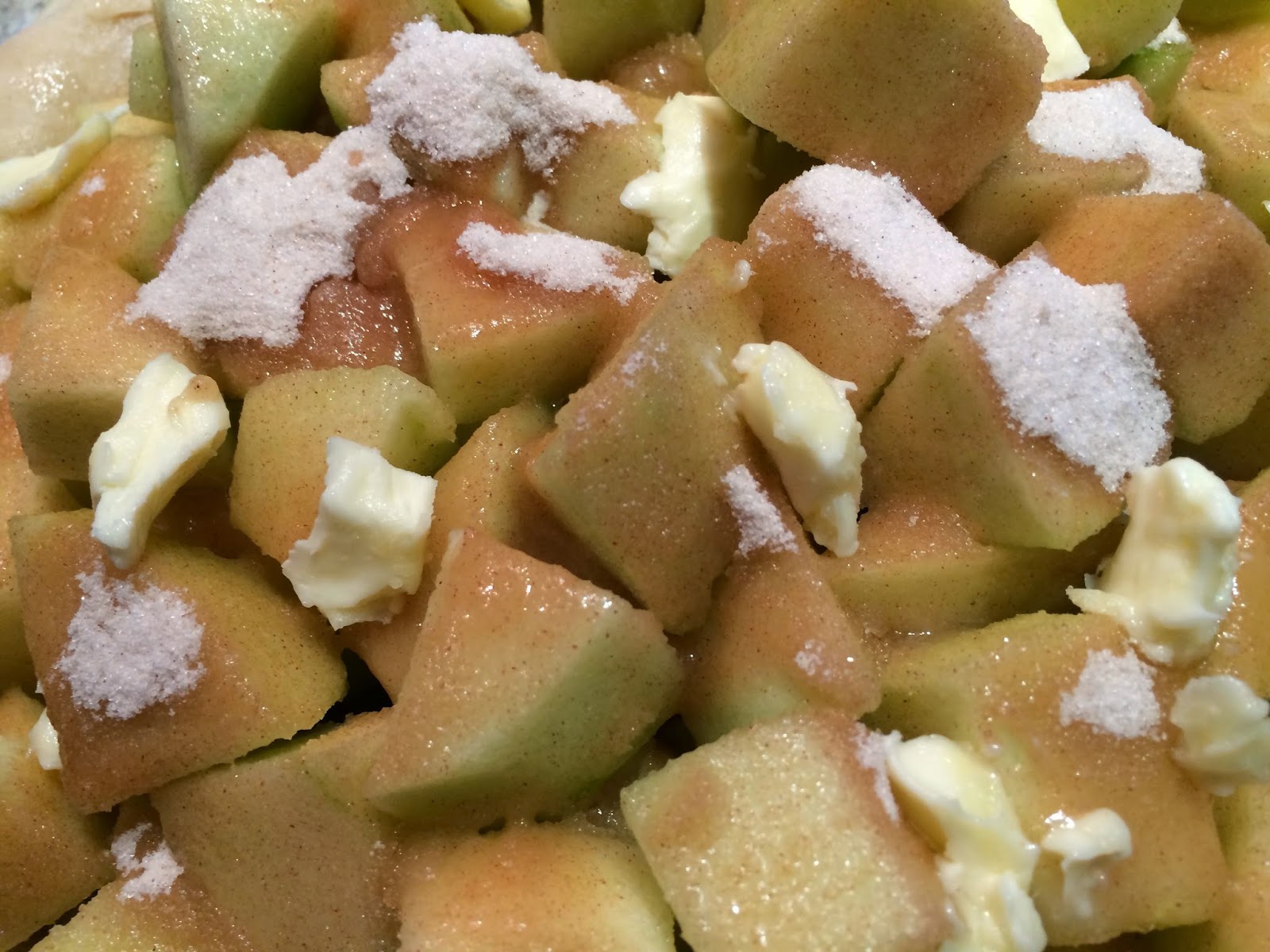 I rolled out the top crust, placed it on the fruit, folded it under, trimmed excess, and cut holes to vent… 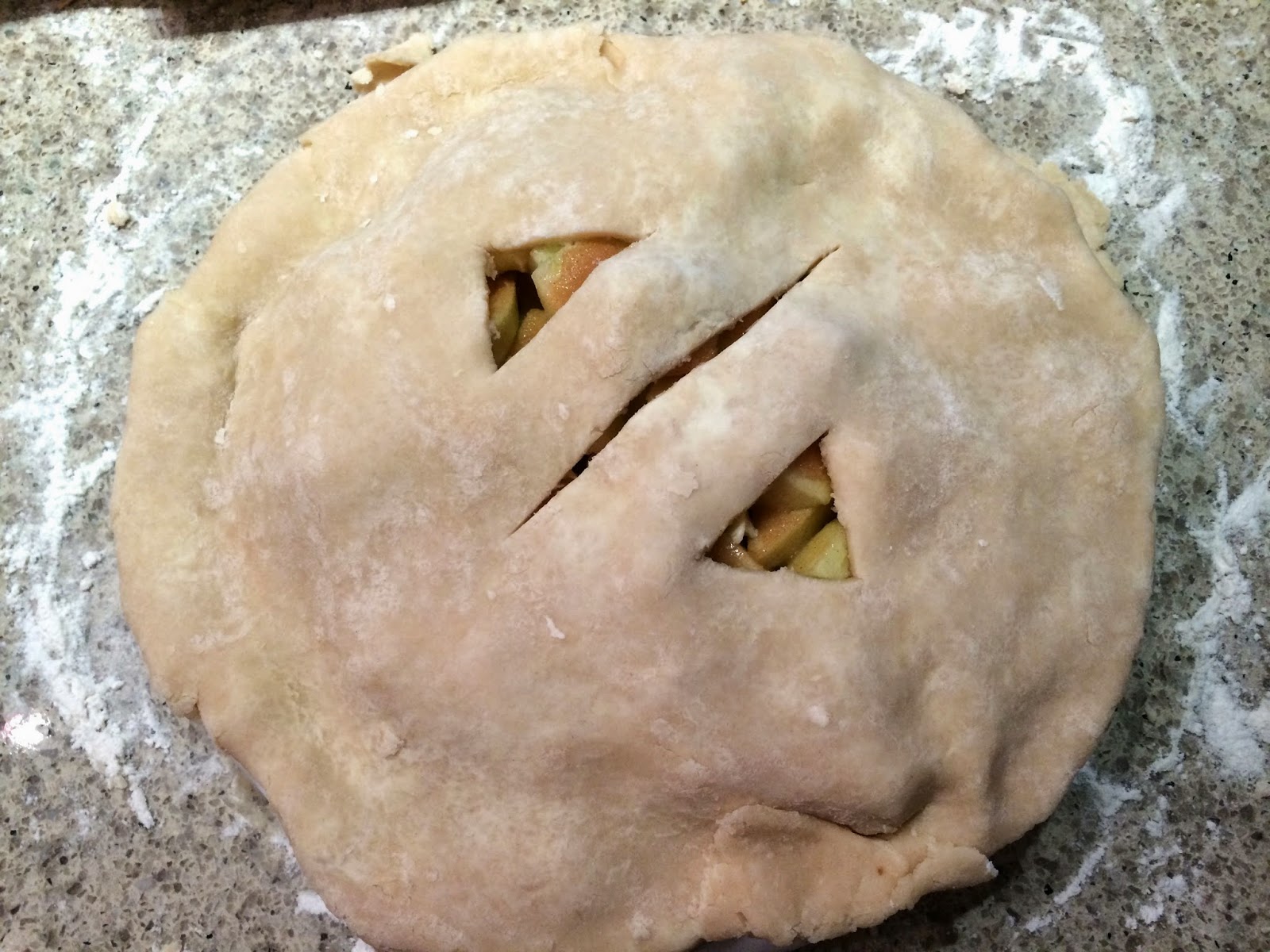 And finally I decided to brush the top with egg this time. Extra fancy. 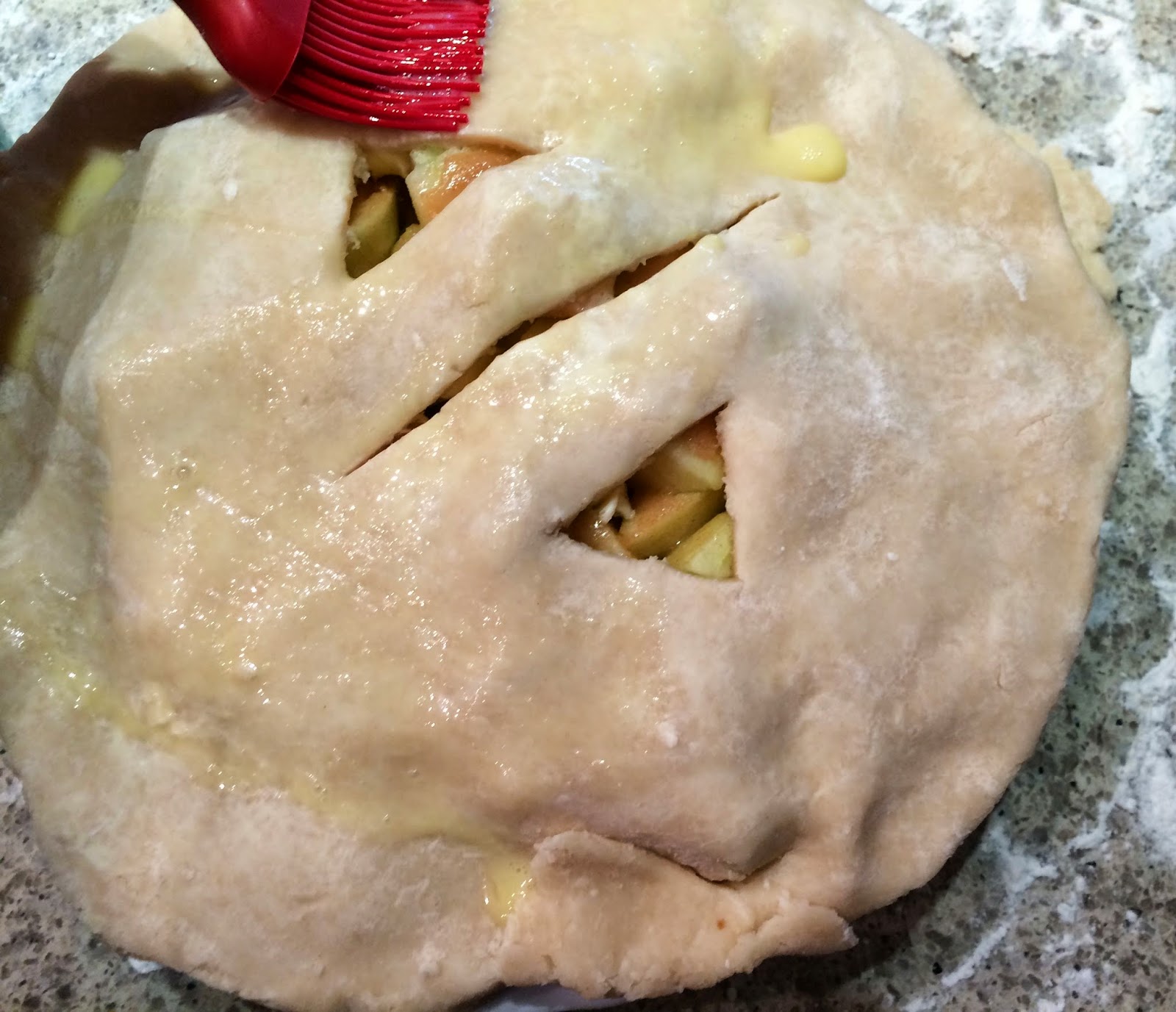 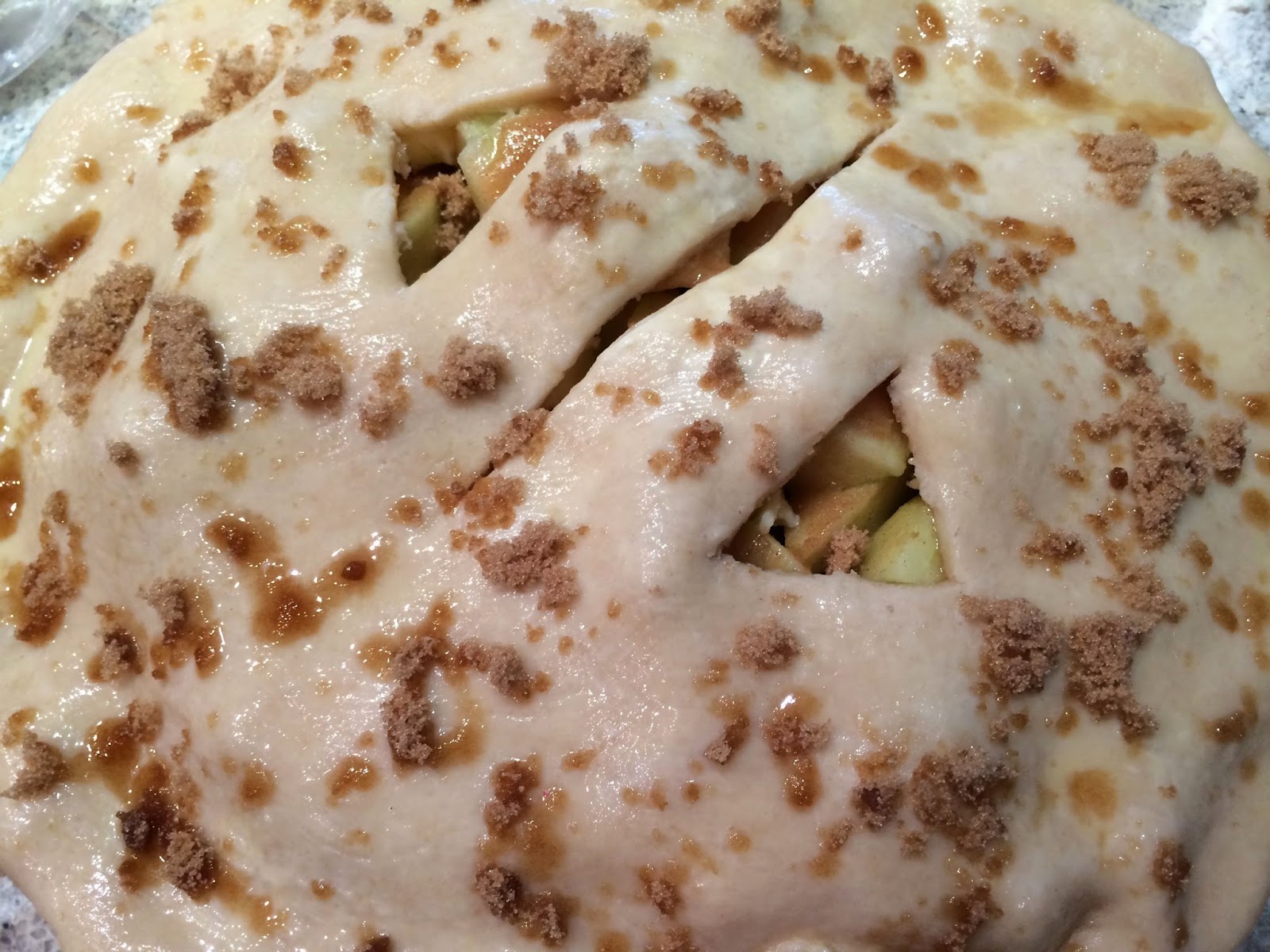 Okay and I decided to sprinkle the top with brown sugar which ruined the prettiness. I thought it'd taste good, okay?! I probably would not do this again, though, because, well, it looks a bit diseased, doesn't it?

Then I baked the pie at 425° for 35 minutes, exactly as instructed. 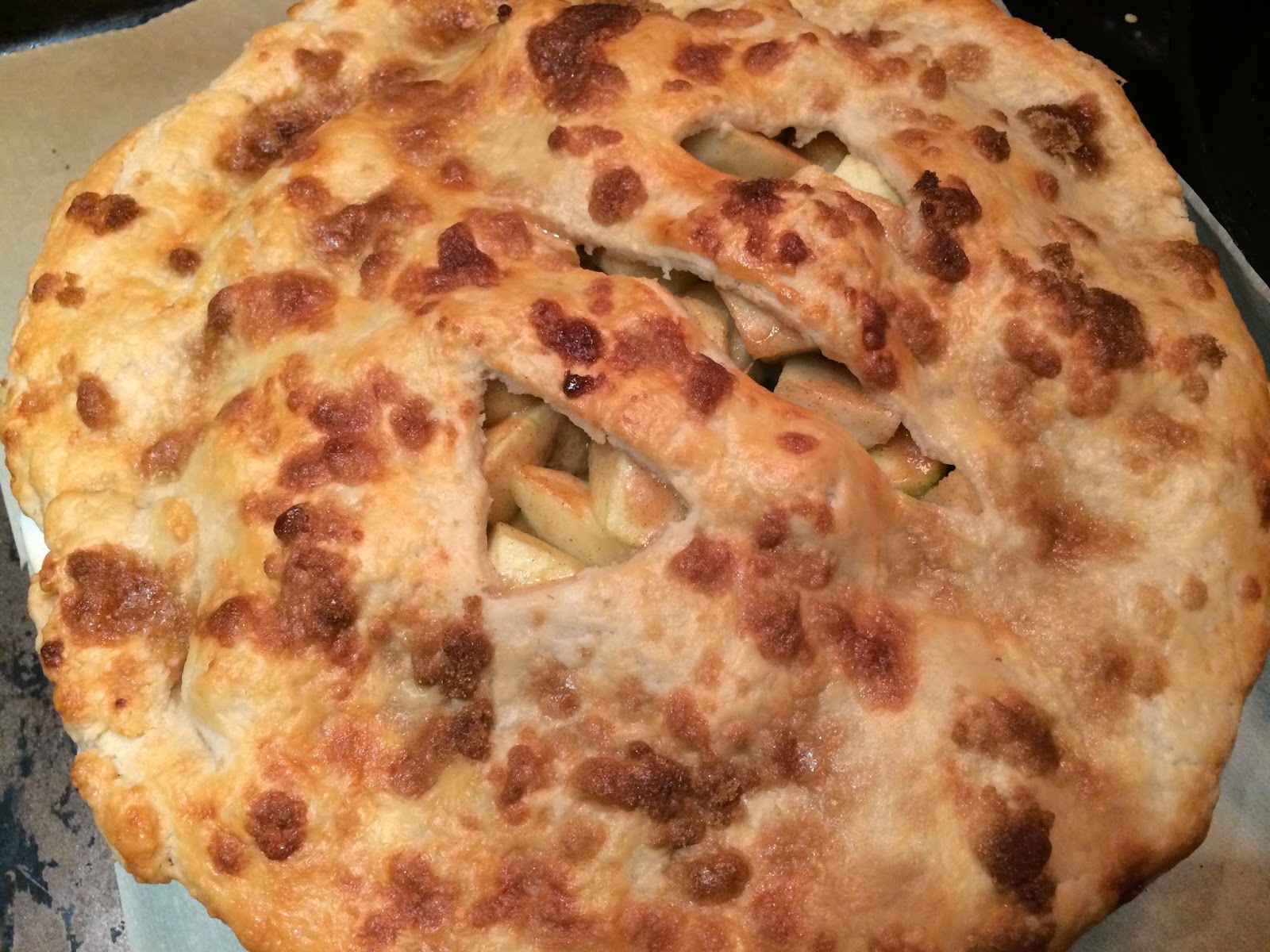 Quick Aside: me tell you something about the last time I made an apple pie. It was early April. I took all this time to peel and slice the apples as thinly as I could.. 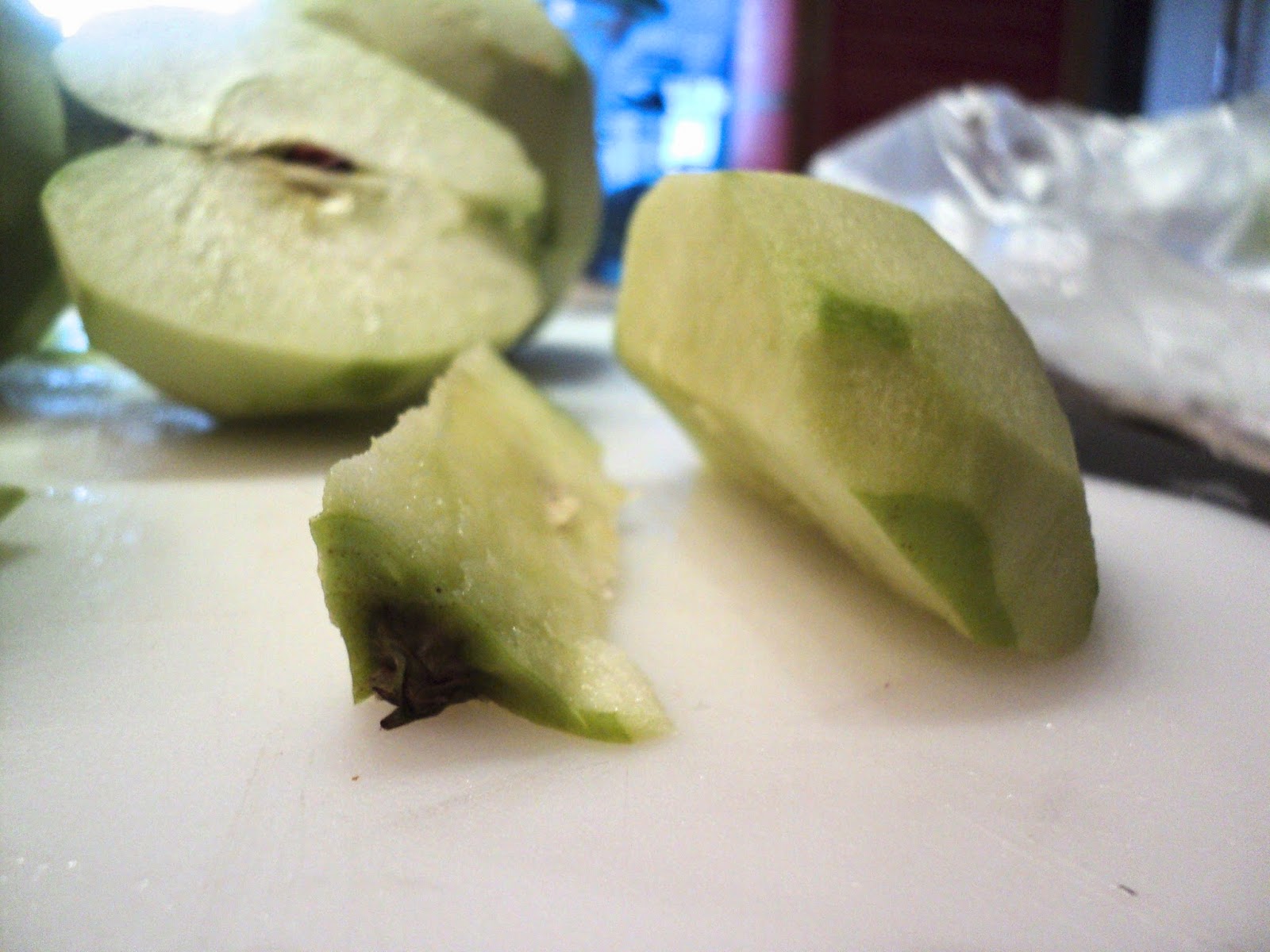 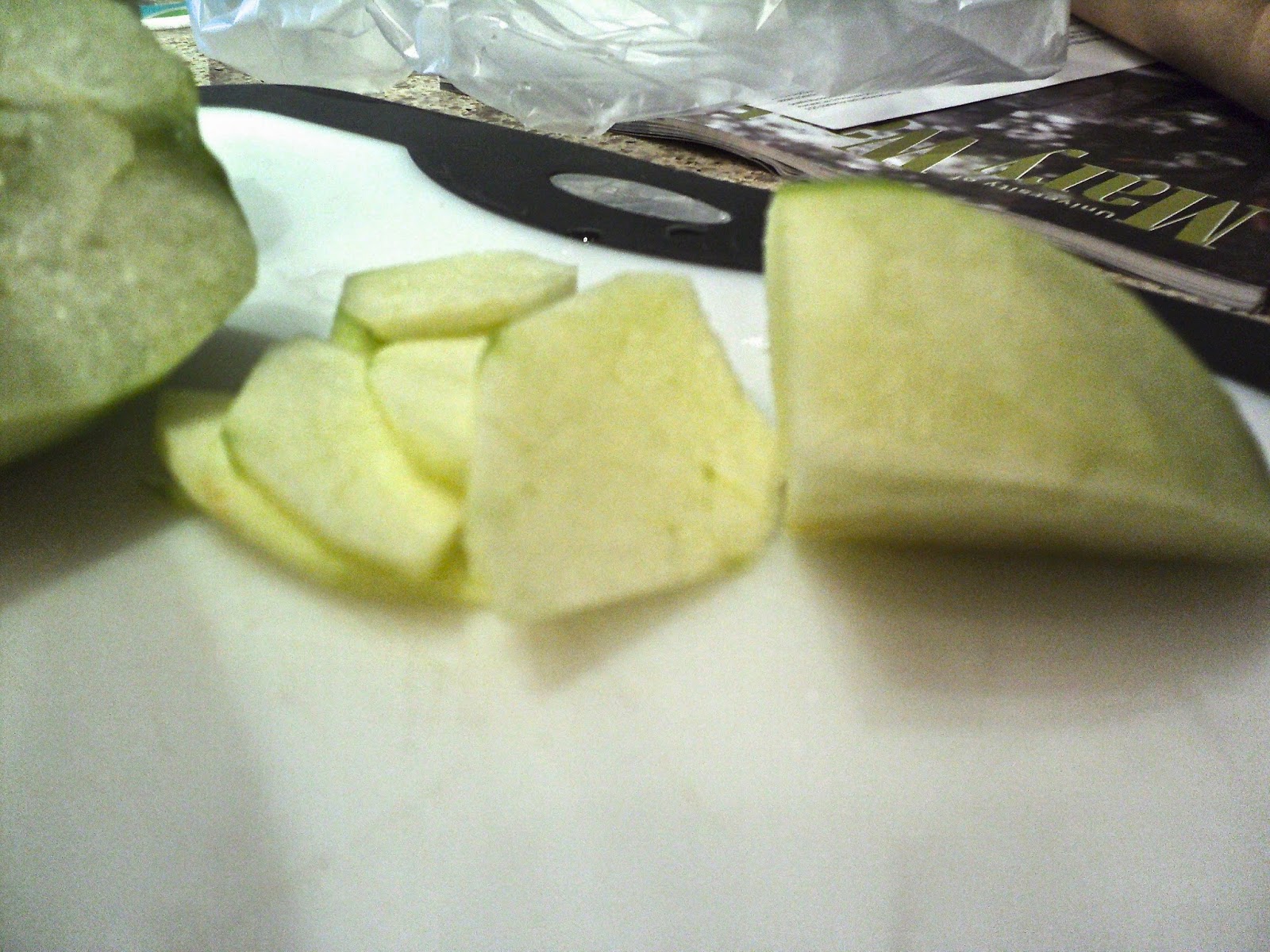 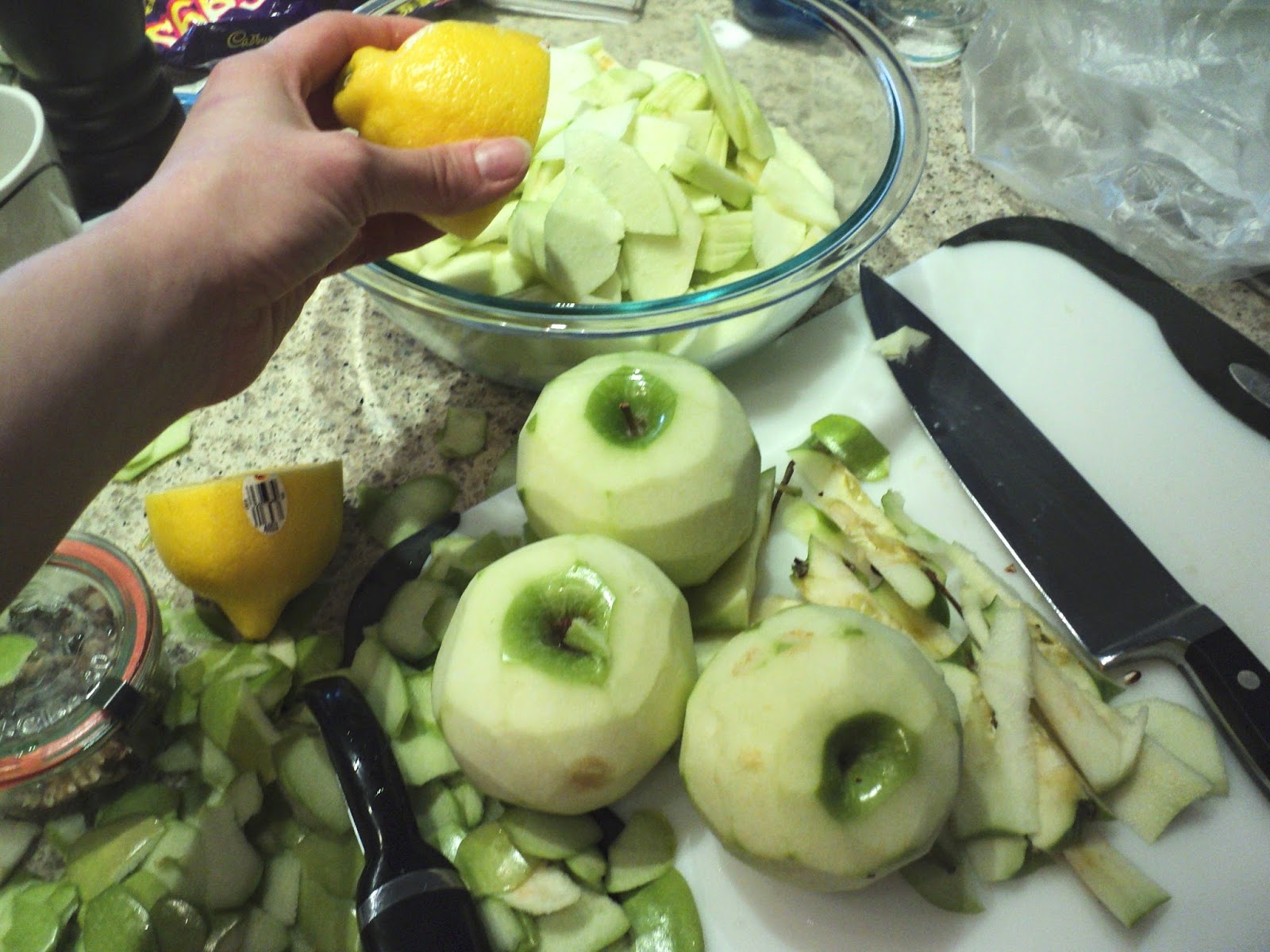 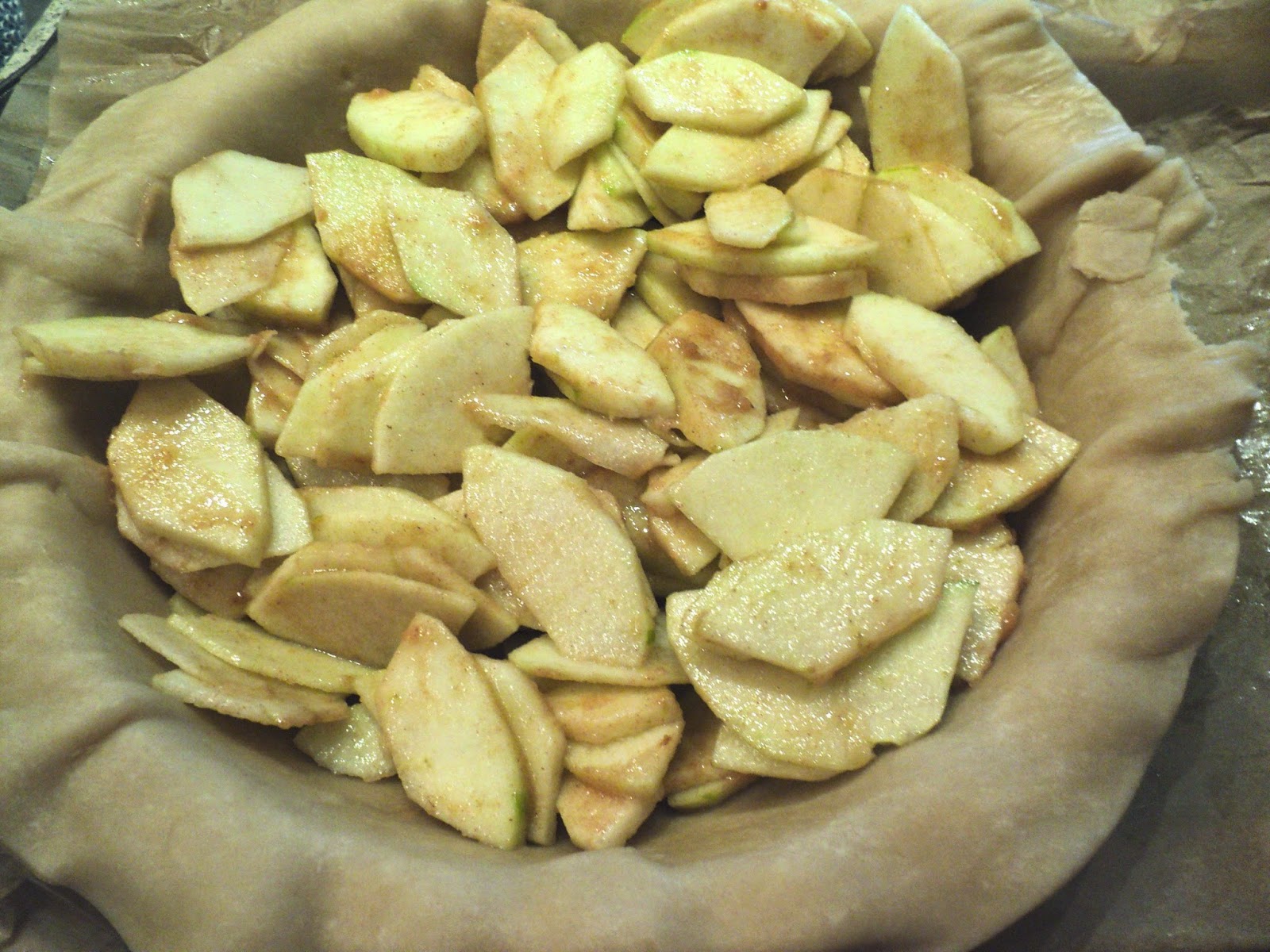 I cut a beautiful hole in the top crust, like a pro… 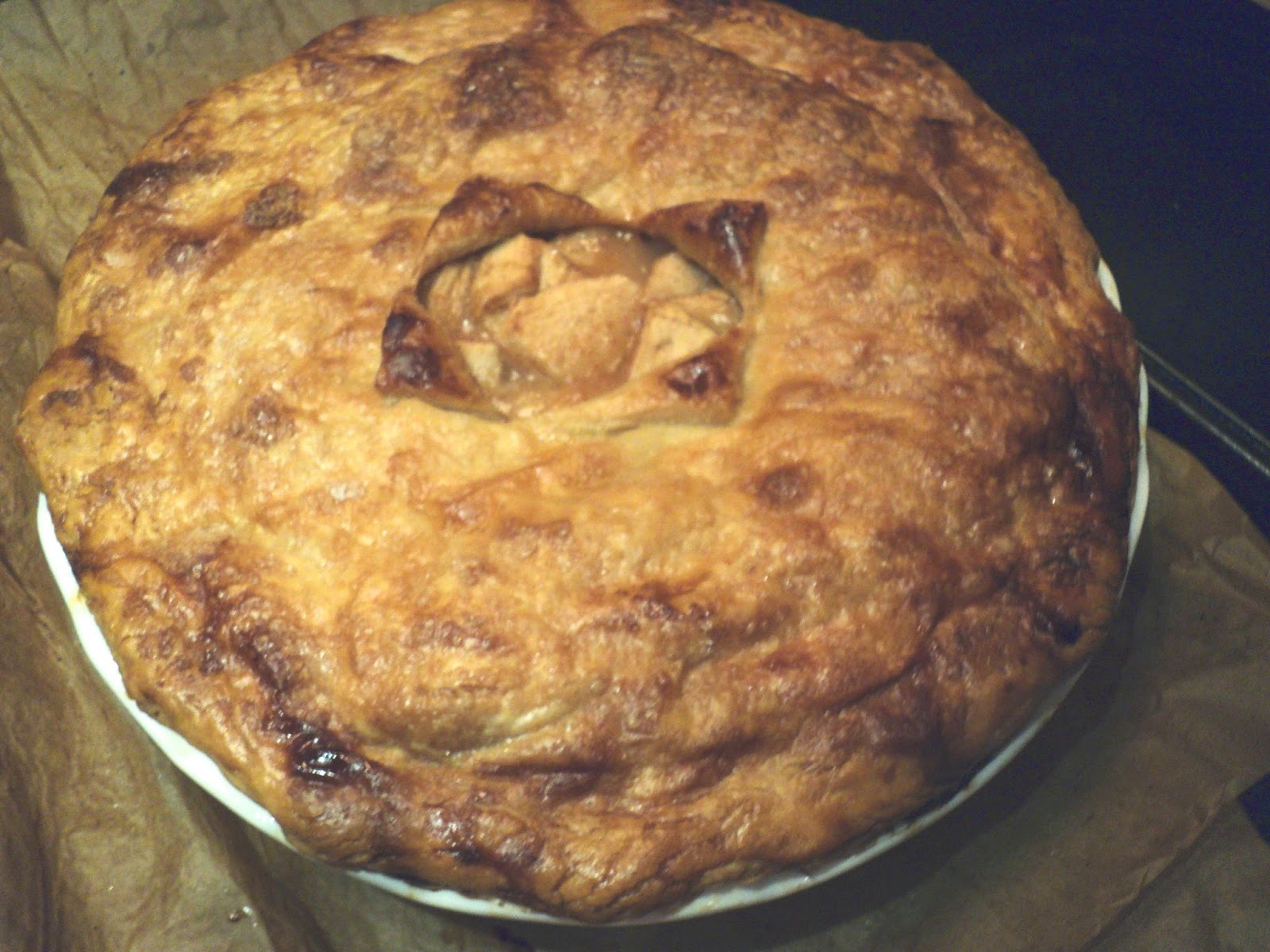 And then I started poking the apples through that hole because I was paranoid that they wouldn't be properly cooked through. I baked the bloop out of this pie until, lo and behold… 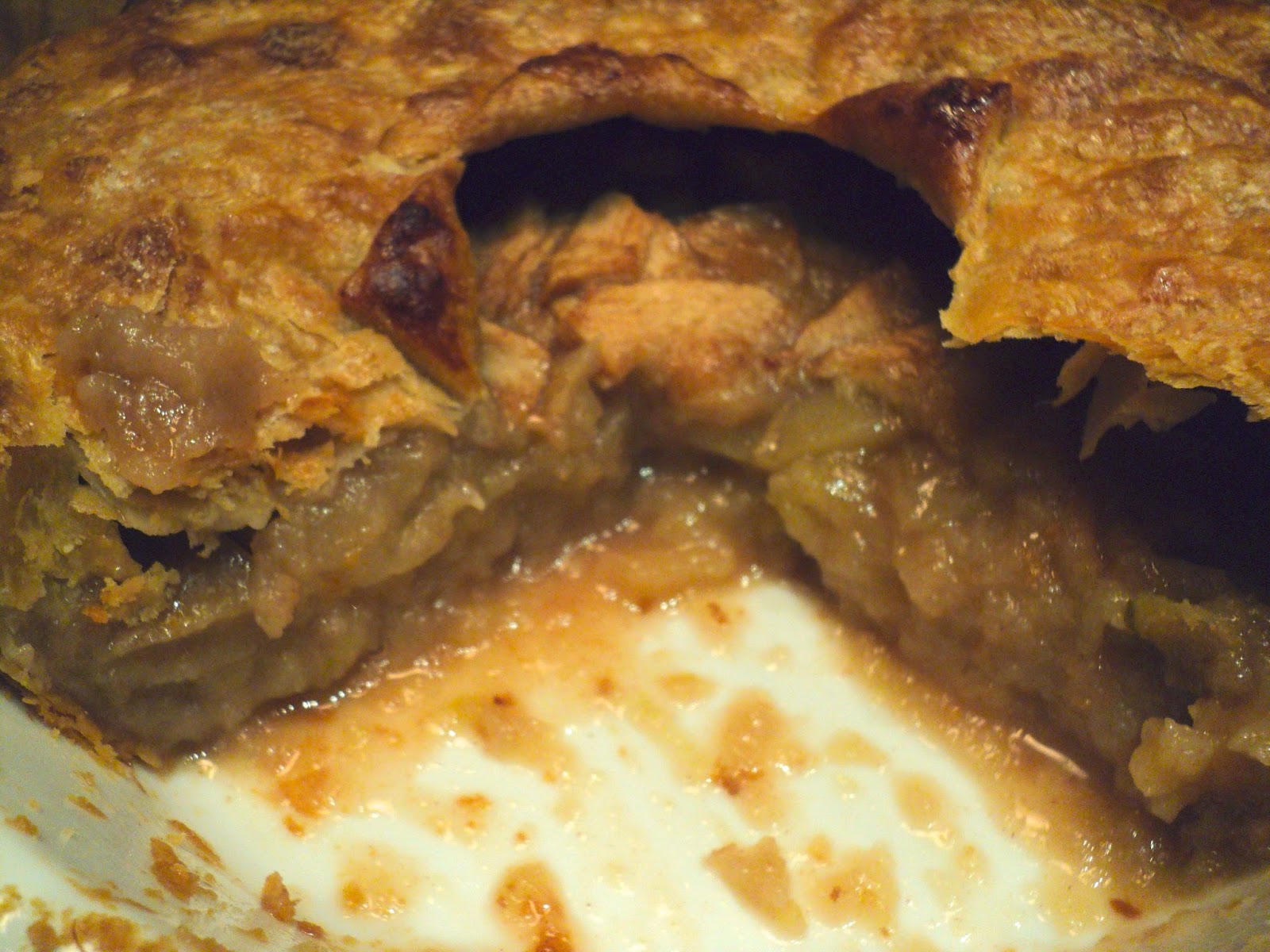 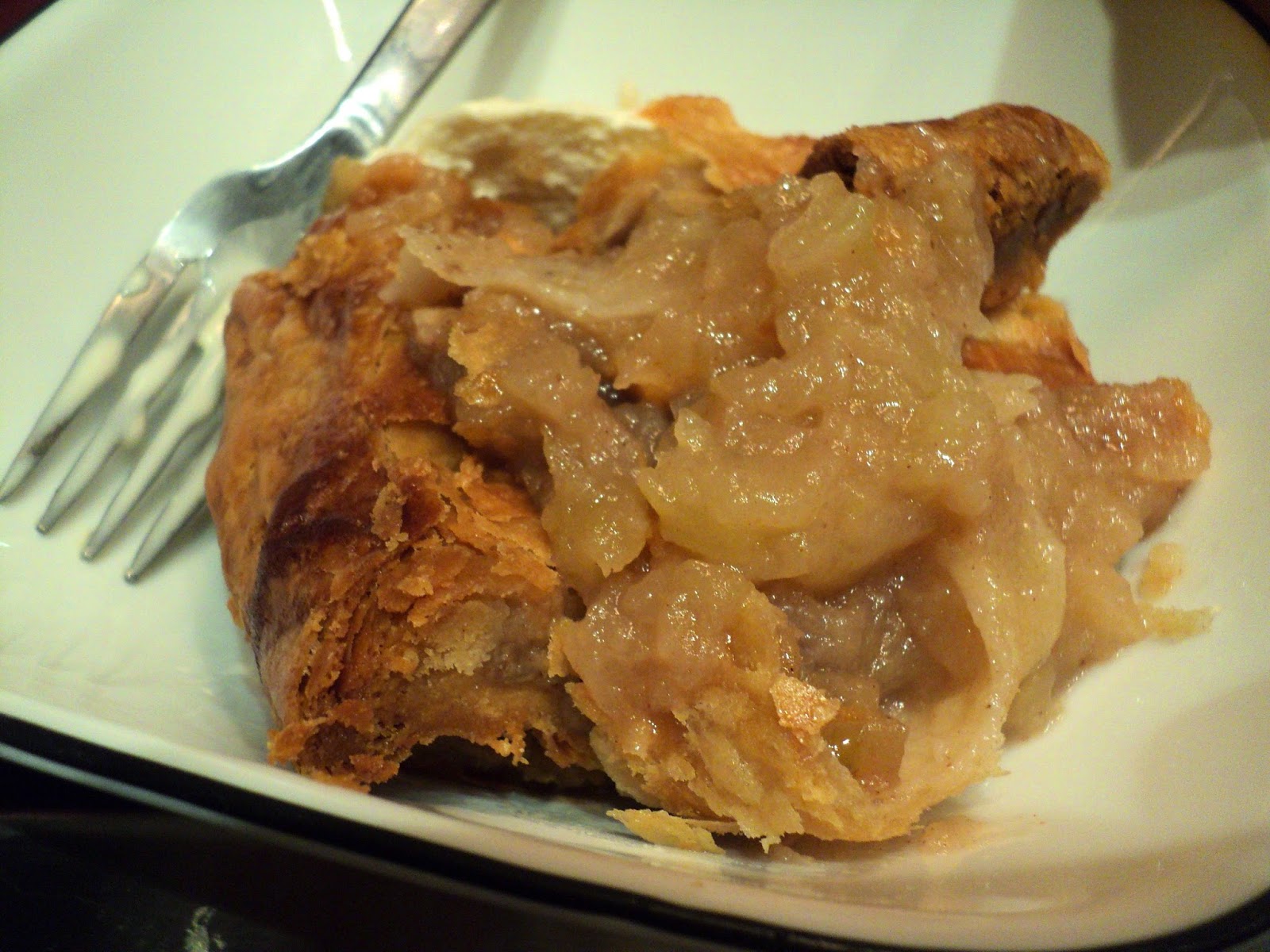 All that time I spent carefully slicing. Wasted! I was so disturbed by this incident that I didn't blog the recipe as intended and I didn't even attempt another fruit pie of any sort until June.
************

I let the July pie cool completely and then I cut into it. The juices hadn't thickened. The apples were still kinda crunchy. It was happening again!

I put the pie back in the oven (..after preheating again) and I baked it for 10-15 mins at a time until I could see bubbling juices and not a minute more!

And this is how I found myself at 9pm running back and forth from TV-time with my hubby (True Detective) and our oven, shaking and poking and searching for clues that the pie is/is not ready.

I ended up baking the pie for about double the recipe-prescribed time. Let's call it an hour. I did cover the pie with foil for much of the latter cooking time, and I only set the oven to 375° to prevent my lovely crust from getting too toasty.

I also suspect that if I had sliced the apples thinly, as the recipe required, they would have cooked faster and thus 35 mins might have been enough?
But it turned out pretty well!

The flour-on-the-bottom trick had a bonus that never would have occurred to me: the bottom crust of a fruit pie is always my favorite part because it soaks up all the sweet fruity goodness. If you add flour to the top of the bottom crust, you essentially create a lovely fruit-juice-doughy mixture under the fruit! So the awesome bottom crust is, well, magnified? Doubled? Increased in volume?

Thank you, mother-in-law, for sharing this method with me!
Posted by Lenore