Well, it's hot and breezy in Seattle, which makes me feel like doing two things: Swimming and Eating Fruity Baked Goods, like pies and cobblers. Heck, three things: let's add guacamole. And drinking rosé. Um, and sunbathing? Ok, well, I mean, you get it. Most seasons carry with them certain traditions and yearnings and mine involve the above.

Our grocery store had huge cartons of Oregon blueberries on sale ($4? Maybe?) last week so I got one and immediately thought "how in the world am I going to eat this many blueberries?" My husband said "make smoothies," to which I said "You're right, a pie would be amazing!"

I've never been that much of a pie-baker… maybe 3-4 a year at most. That may be more than a lot of people but I suppose what I mean is that I don't have a "personal recipe" or any particular methods that I can claim as my own. Every time I make a pie, I learn something about more/less fruit, more/less bake time, etc., and then I wait four months before making another one.

I used to use Smitten Kitchen's all-butter recipe because Crisco creeps me out sometimes, but after a few tries I thought that recipe made a tough crust. Could it have been my methods rather than the recipe? Of course! But this year I chose to abandon SK all the same and try out Ina Garten's recipe instead. And it was amazing! My filling recipe was a little clunkier, but I believe I learned enough from it to instruct you faithful readers with adequate know-how.

**Those of you who attended my bridal shower are probably thinking "Wait, didn't she get an awesome Braun multi-function food processor at her bridal shower? Right off the registry?" and you are correct! We didn't bring back all our wonderful wedding presents because we knew we'd be back in Virginia in a year and it seemed silly to take the larger and/or more fragile items across the country with us. Therefore, we have a whole load of wonderful new-home new-marriage gifts waiting for our return East.

Here's the recipe, filling + crust, to be detailed further below:

(from The Kitchn, with some adaptations based on my experience)

First I made the dough. I put the Crisco in the freezer because I forgot it had to be cold first… then I measured out 3 cups of flour and tossed it in a large bowl with 1T sugar (maybe 1.5T) and 1t salt. I cut up the butter right out of the fridge while it was very cold.
When the butter was all cut, I placed it on a paper plate and tossed it in the freezer to chill. While the butter cooled back down, I mixed the sugar and salt in with the flour and prepared the ice water.
I added the (..vaguely chilled) Crisco.
Then I got the butter back out… 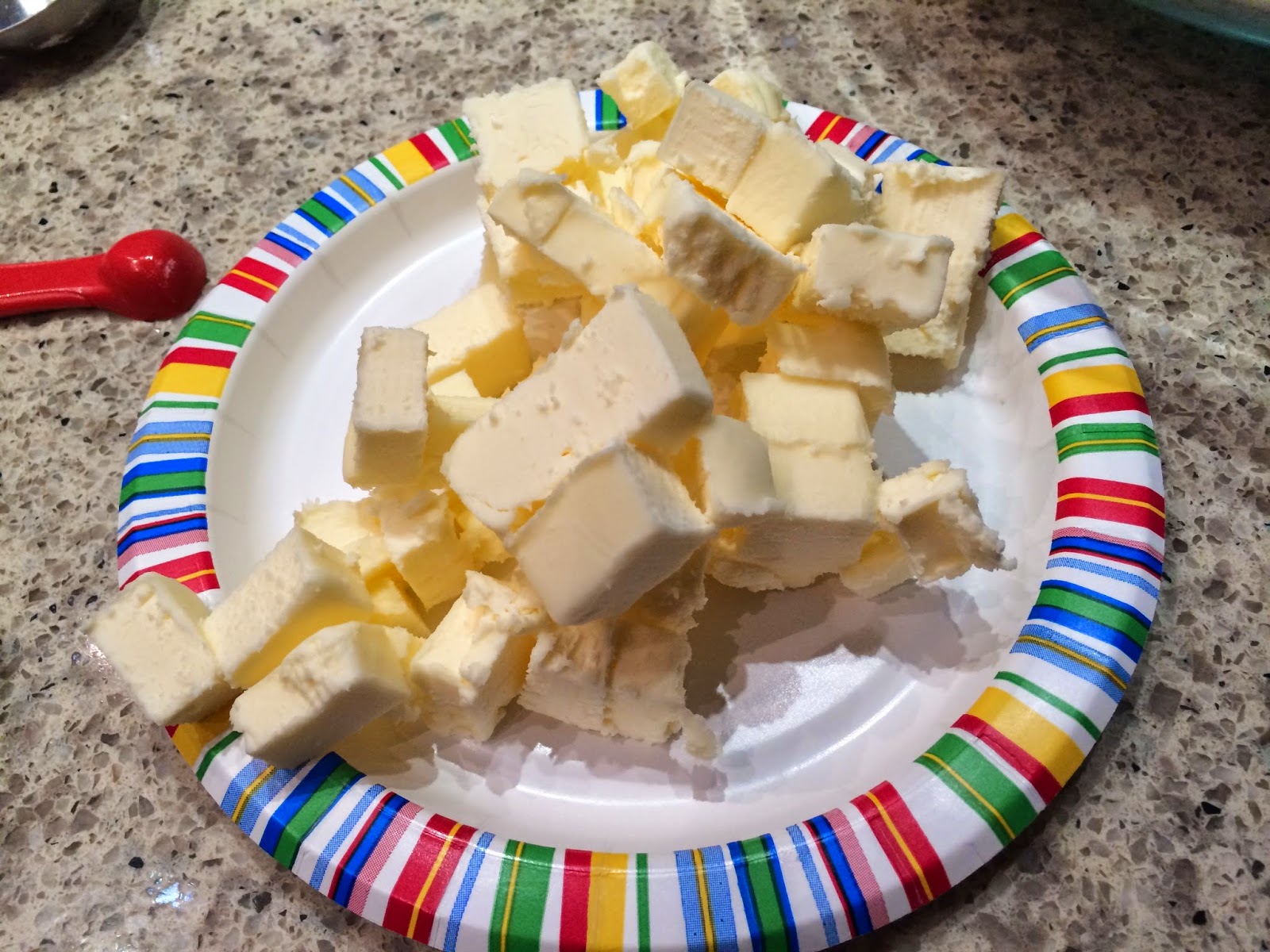 and I started mixing it into the flour/Crisco/sugar/salt. I don't have a pastry cutter either, so I used the "smash it" method which, I must say, is a total delight. This would be so fun for kids. Or adults who enjoy life's simple pleasures. Just smash that butter!
Keep smushing and smashing until the mixture looks about like this: 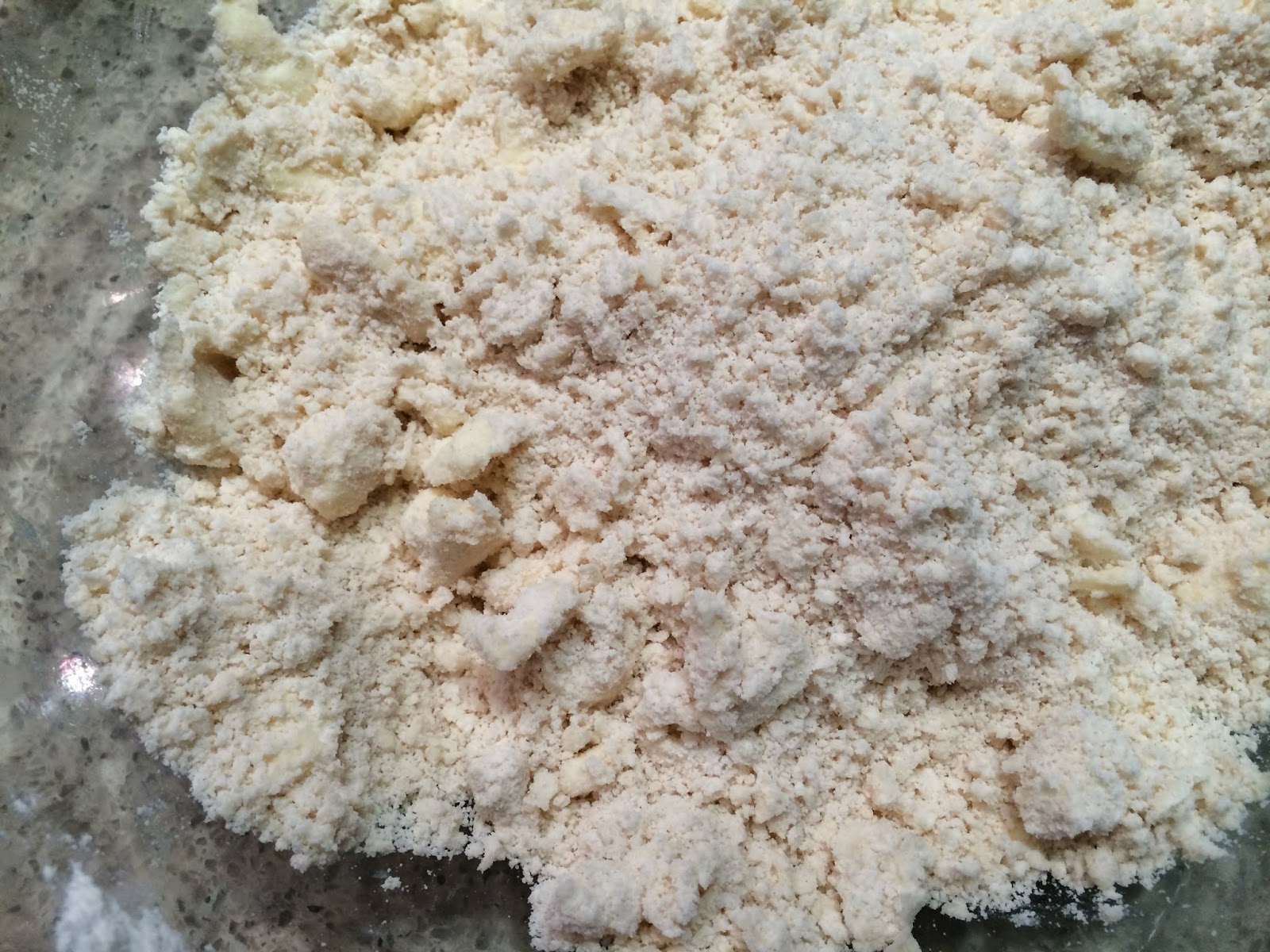 TV chefs will call this "wet sand" or "pea-sized lumps." I just mash the butter with my fingers until there are no huge clumps left. Small-to-medium clumps are fine.

Then I transition to a dough-mixer-whisk-thing (thanks, sister!) and I start adding the water. I went ahead and added 3-4T before stirring because I live on the edge. This is how it looked after 6T:
After 8T, I got my hands in there and tried to work the mixture into a cohesive ball.
I divided the dough lump into two equal portions and wrapped them in plastic.
Then I moved the dough to the refrigerator and ignored it for at least 30 mins. I think this helps the flour to "rest" and will make it easier to roll out. Also, you want the dough to be cold when it goes in the oven, so after all the smushing and smashing it makes sense to cool the dough back down again.

Let me preface this next part by saying I am not that good at rolling out pie dough. It's buttery and Crisco-y, AKA kind of sticky in places, and it's supposed to be super cold and therefore resistant to being rolled out. Right? And you're supposed to keep the dough moving (roll, turn, roll, turn, roll, flip, etc) so it doesn't stick to your surface. And don't touch the dough too much! Don't warm it up! It's hard to keep it moving when it gets big… the dough tears, you guys! So basically I just go for it, use lots of flour, keep it moving, and try not to curse too much when it sticks/tears. 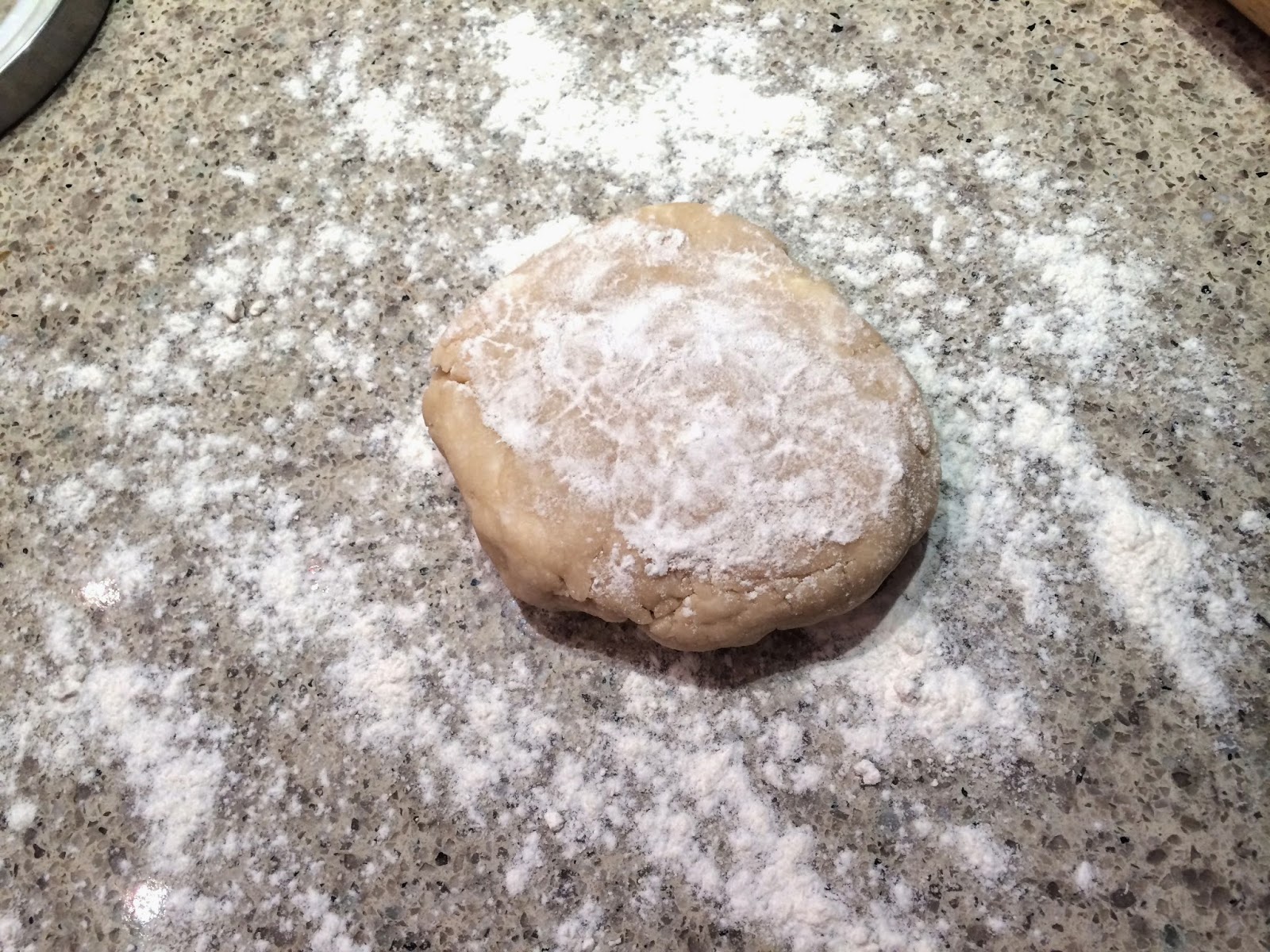 The only advice I really have which I know is accurate is that you should take care to roll over the dough… don't stretch it out. Let the pressure of your rolling pin do the outward stuff. If you stretch the dough out, it'll just retract when it bakes, leaving you with a shrunken pie crust.

When I think I've gotten the dough big enough to fit in my pan, I roll the dough around my rolling pin and then unroll it over the pie pan. No photos of this because it was intense.

I trimmed off any long edges… 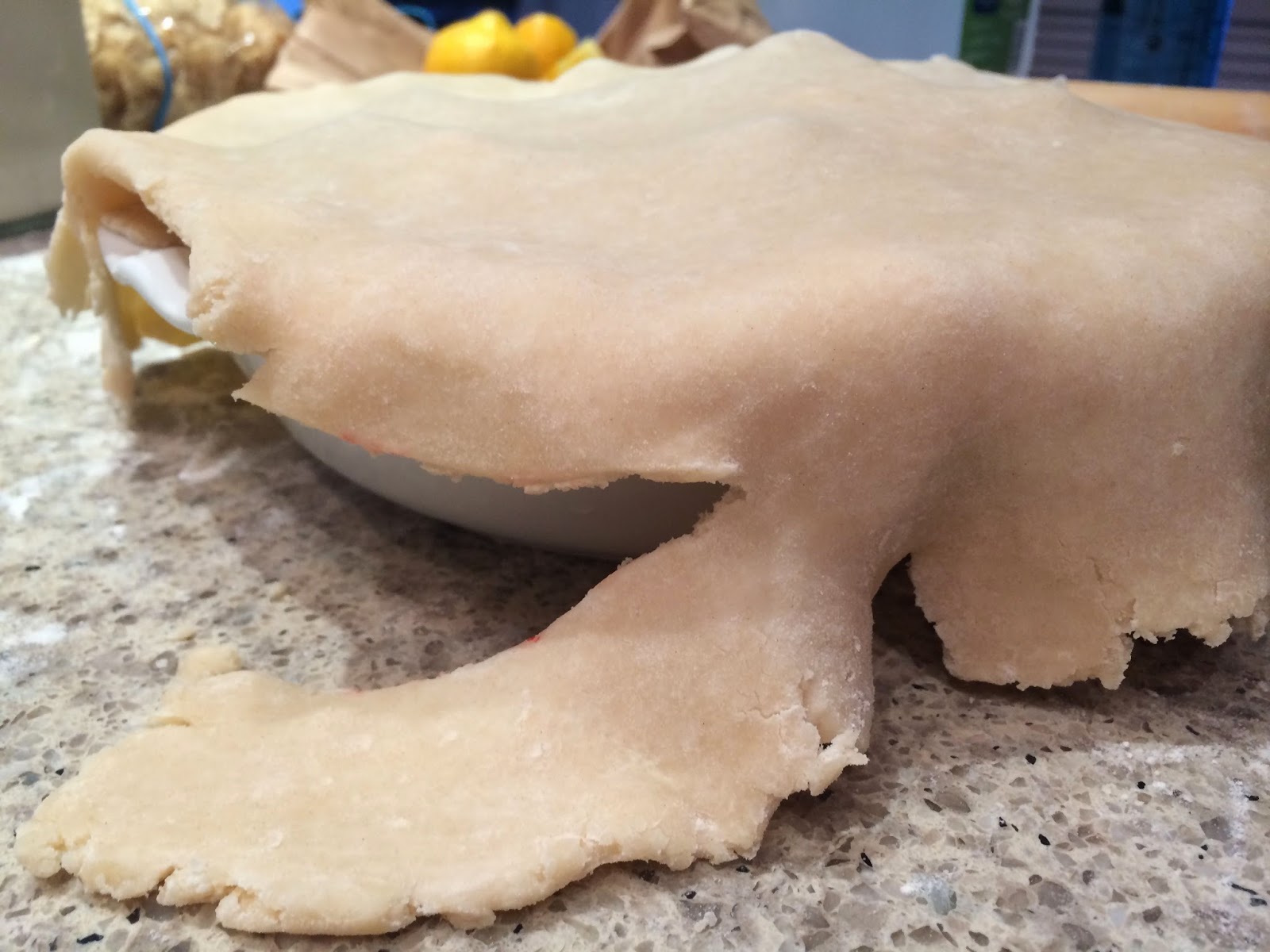 ...gently patched what I could, and then I put the pan back in the fridge while I prepared the berries.
I rinse the berries and let them drip dry and/or use paper towels to get them as dry as possible. I also pick off any leftover stems because I hate that. The stems. Then I add the lemon zest and sugar…

Then I added cornstarch and the 2T juice. Fun fact: My smallish lemon had exactly 2T juice in it. I measured and everything! 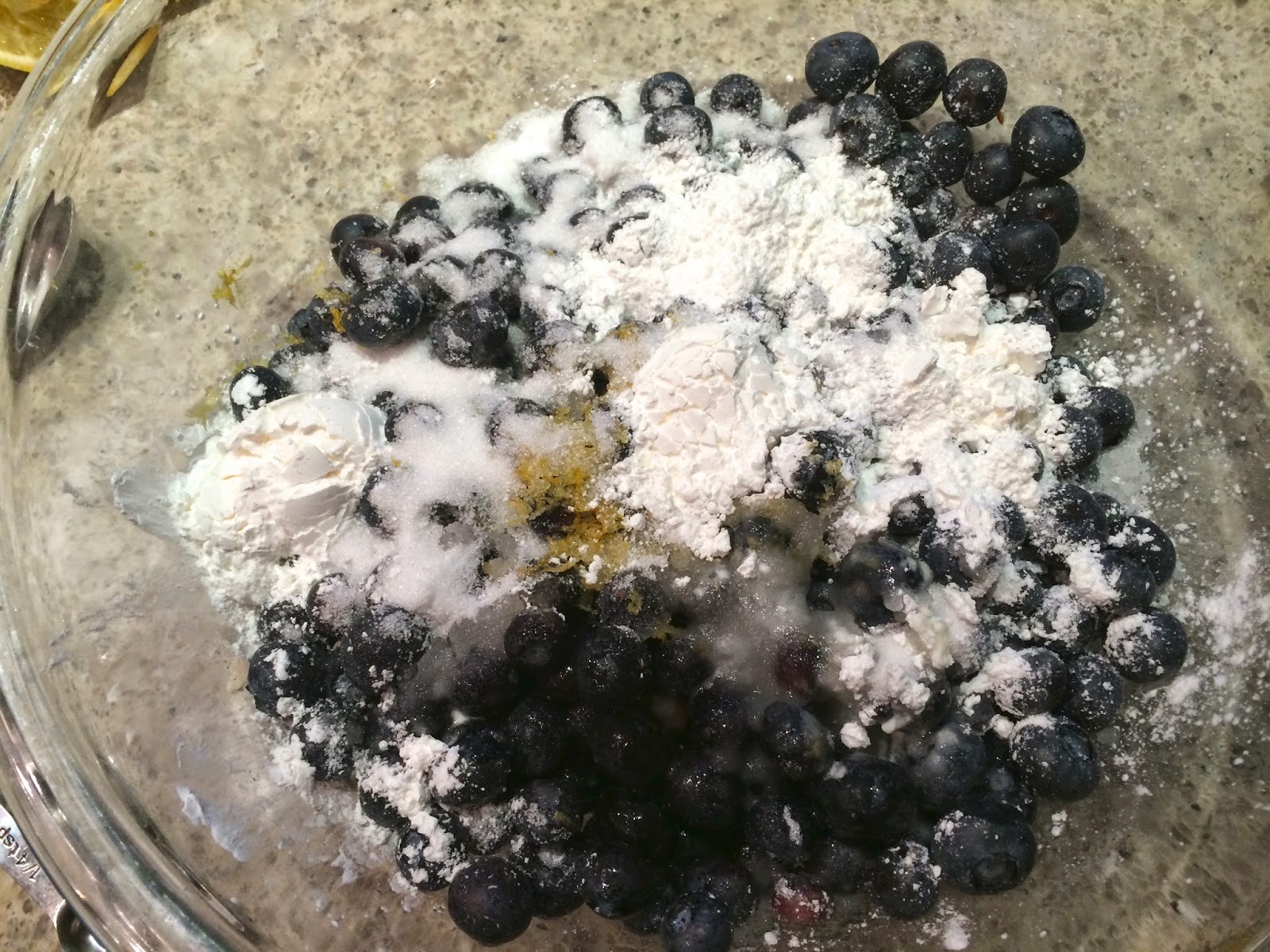 Okay, this next part is important! I added 4 1/2 tablespoons of cornstarch because the recipe said "3-4T" and the author admitted to preferring liquidy pies. I wanted mine thicker, so surely 4 1/2 T would be enough!

I was wrong. It was not enough. I did all kinds of post-baking magic to get my pie sliceable and by that point I viewed it as a frankenpie and I could hardly eat it.**

Anyway my point is that for 6 cups of berries and the smattering of extra fruits I added which you don't know about yet, 4 1/2T cornstarch wasn't nearly enough. I'd go up to 6 tablespoons. Really!

Mix the berries with their sugar/juice/starch friends… 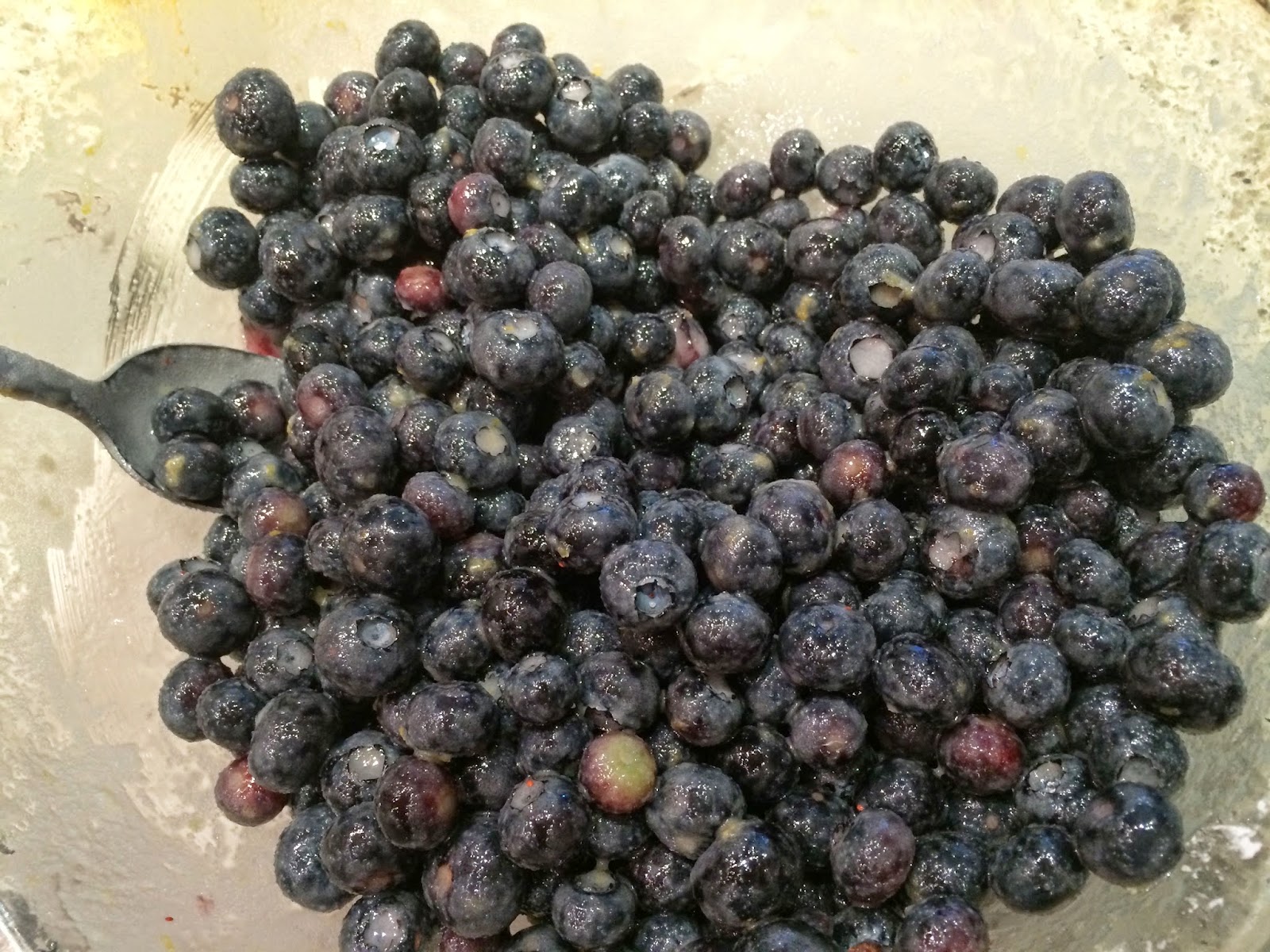 And pour into the cold, cold crust:
I added a few strawberries and blackberries because I knew the blueberries would cook down and I wasn't happy with how full (or rather, how not-full) the shell was. Thus, more fruit.
Then I rolled out my top crust, did some more cursing/patching, and then rolled it over my pie. I trimmed and tucked the edges to make a nice, sealed pie, like this: 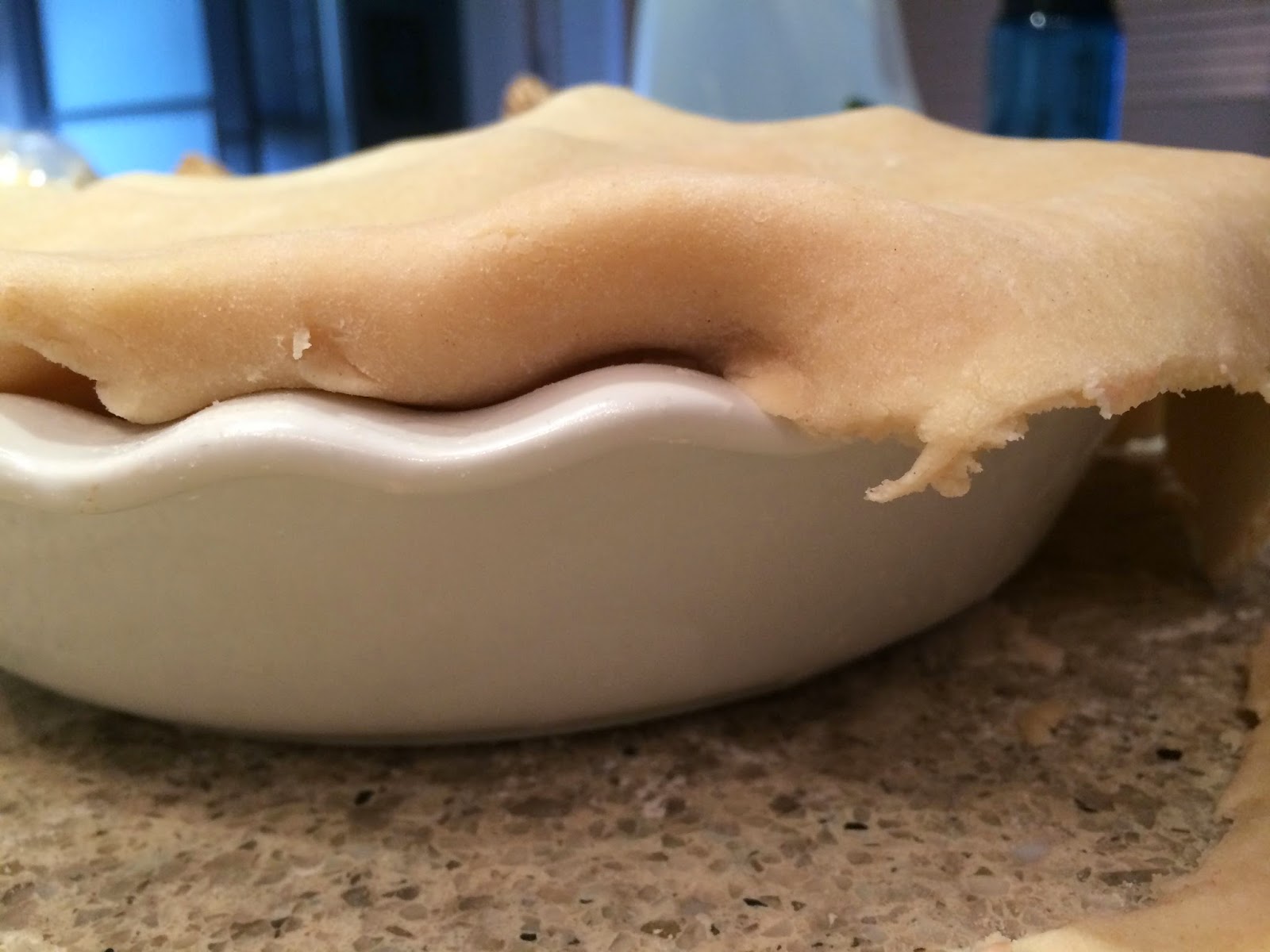 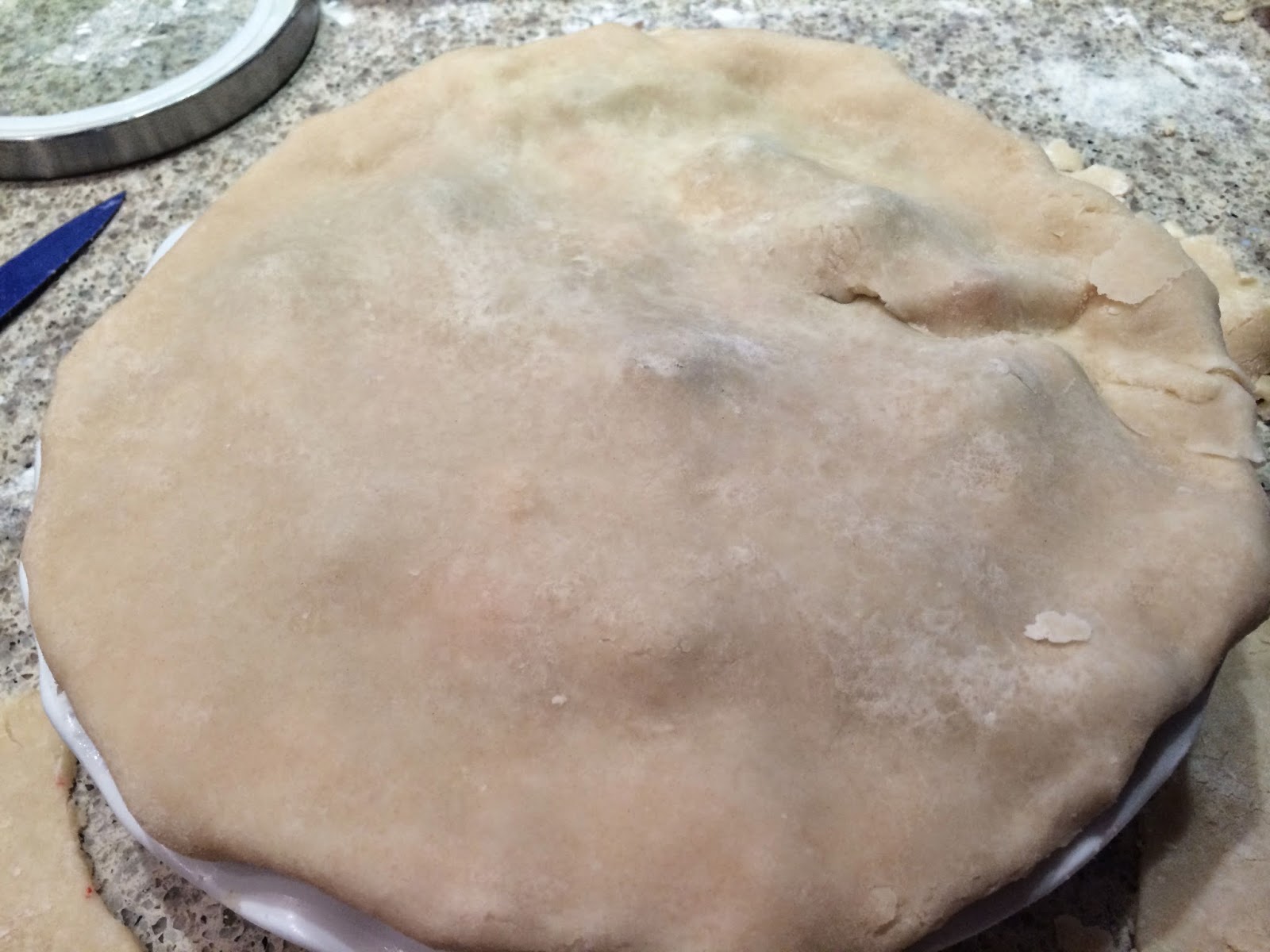 Then I cut a hole in the pie for ventilation and brushed the top with milk. Why not egg? I didn't feel like it, okay?? 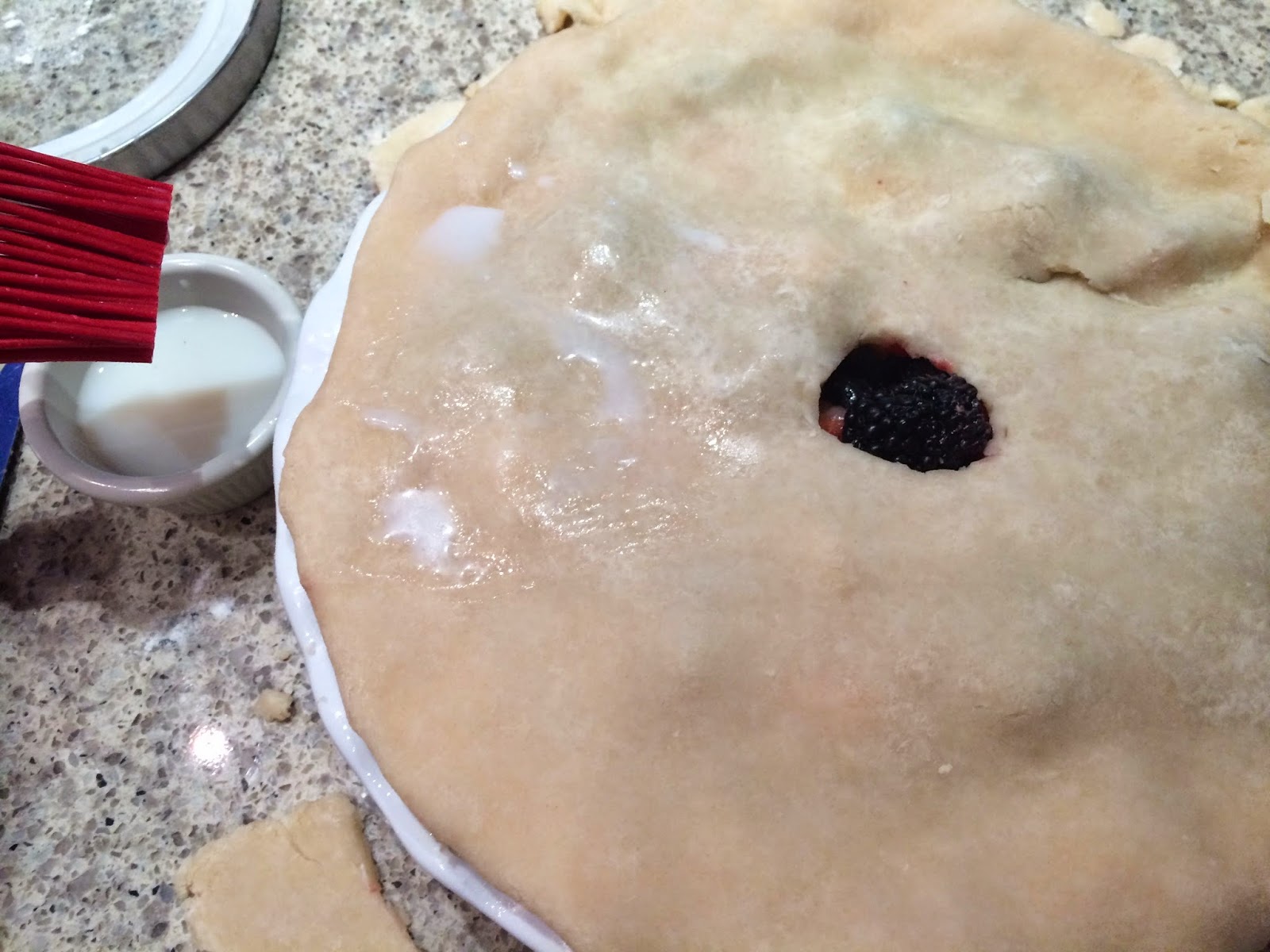 Less defensively stated: brushing the crust with egg would have yielded a lovely, shining golden crust. Not unlike the ridiculous(-ly beautiful) pastry displays one might see at a bakery. I wanted something a little more homegrown in appearance. Truthfully, the milk may not do anything at all.
Then I baked the pie according to The Kitchn's instructions: 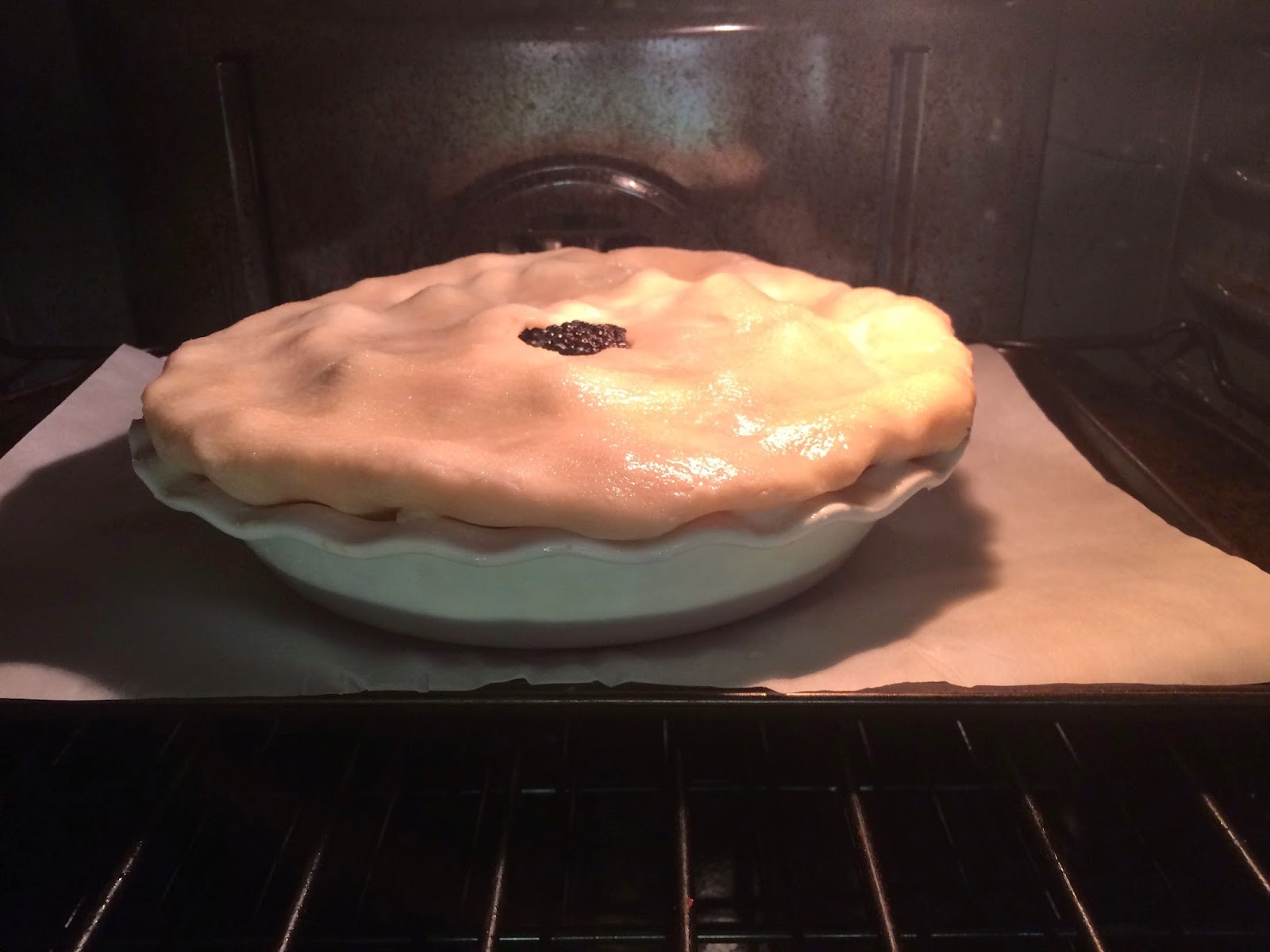 425° for 15 mins, then 350° for about 40 mins. I let it bake until the fruit juices were bubbling. I did have to cover the top of the pie with foil to keep it from browning too severely.

When I took the pie out, it looked like this: 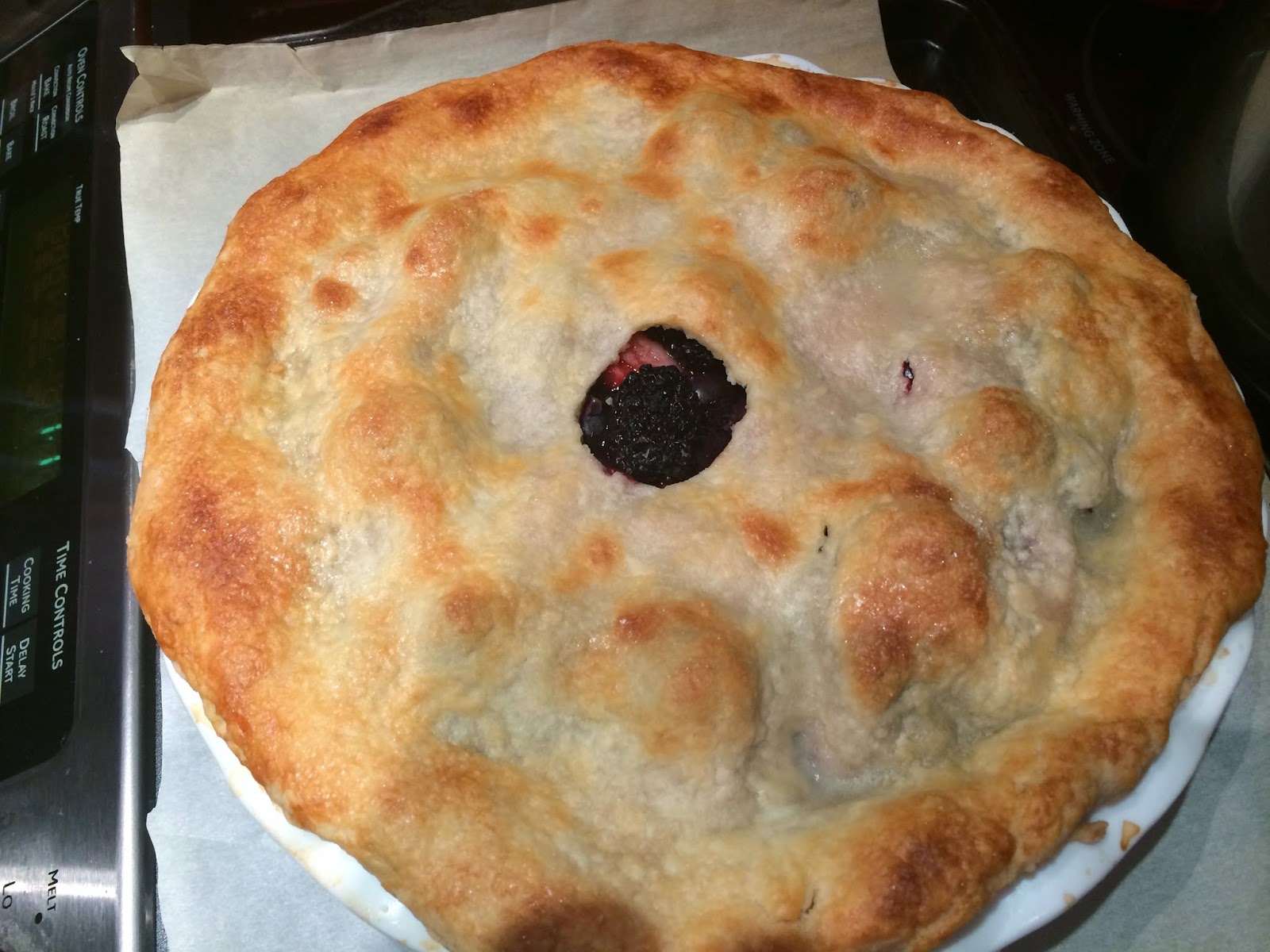 I let the pie cool for at least four hours, maybe as long as five hours, before I cut into it.

But look what happened! 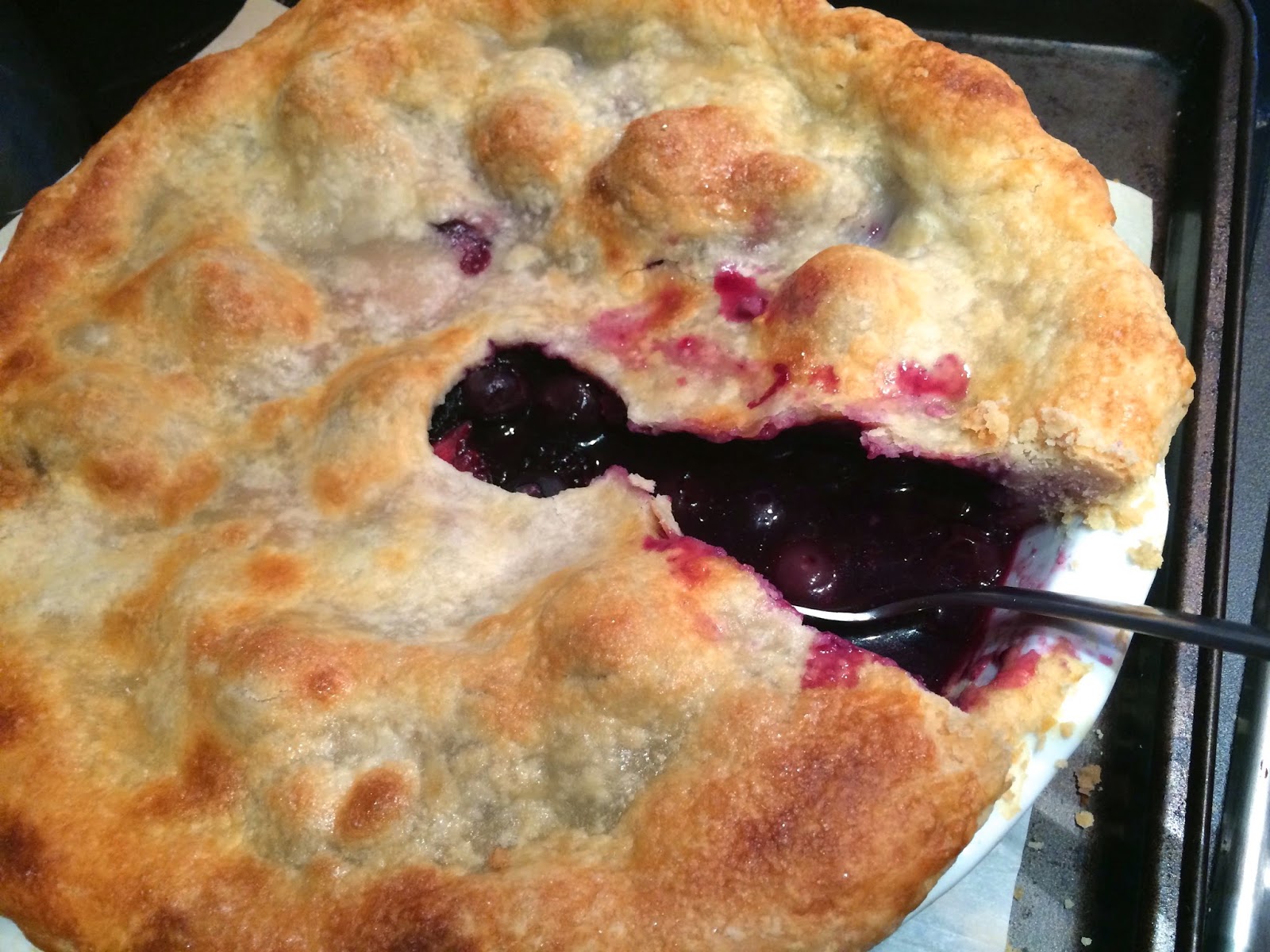 Can you see the juice puddle?

Just trust me: the pie was super juicy. Thin. Watery. The flavor was amazing but it was also rather tragic because, rather than coating the berries in a thick sweet fruit sauce, the juices abandoned their post and just ran into the open space instead. I prefer my fruit pies to be thicker, gloopier, because I think each piece of fruit and each bite of crust should have a little sticky swath of juiciness on them.

Anyway I promised frankenpie magic and, well, you'll just have to trust me on this because I didn't take pictures.

I spooned out as much of the fruity water-juice as I could and I put it in a glass bowl. I mixed it with cornstarch and microwaved it to "cook" and "activate" the starch. The mixture essentially turned solid because I had my starch/liquid ratio off, so I added lemon juice and water to thin it, then some cinnamon because I got paranoid about watering it down, and I microwaved the juice some more. I finally got it to resemble canned pie filling, but then it wouldn't pour back into the pie so I had to thin it out a little more. Also I tasted my crazy mixture and it tasted like starch so I knew it hadn't cooked enough. I added the starchy gloop back into the pie, using a dull knife to gently lift the top crust and allow room for the juices to flow into the far reaches of the pie. Then I put the whole thing (covered in foil) in a low oven (325°) for FORTY MINUTES until the juices were bubbling once more. I kept it at a low temp because I didn't want to burn the crust.

And you know what?

It turned out great. 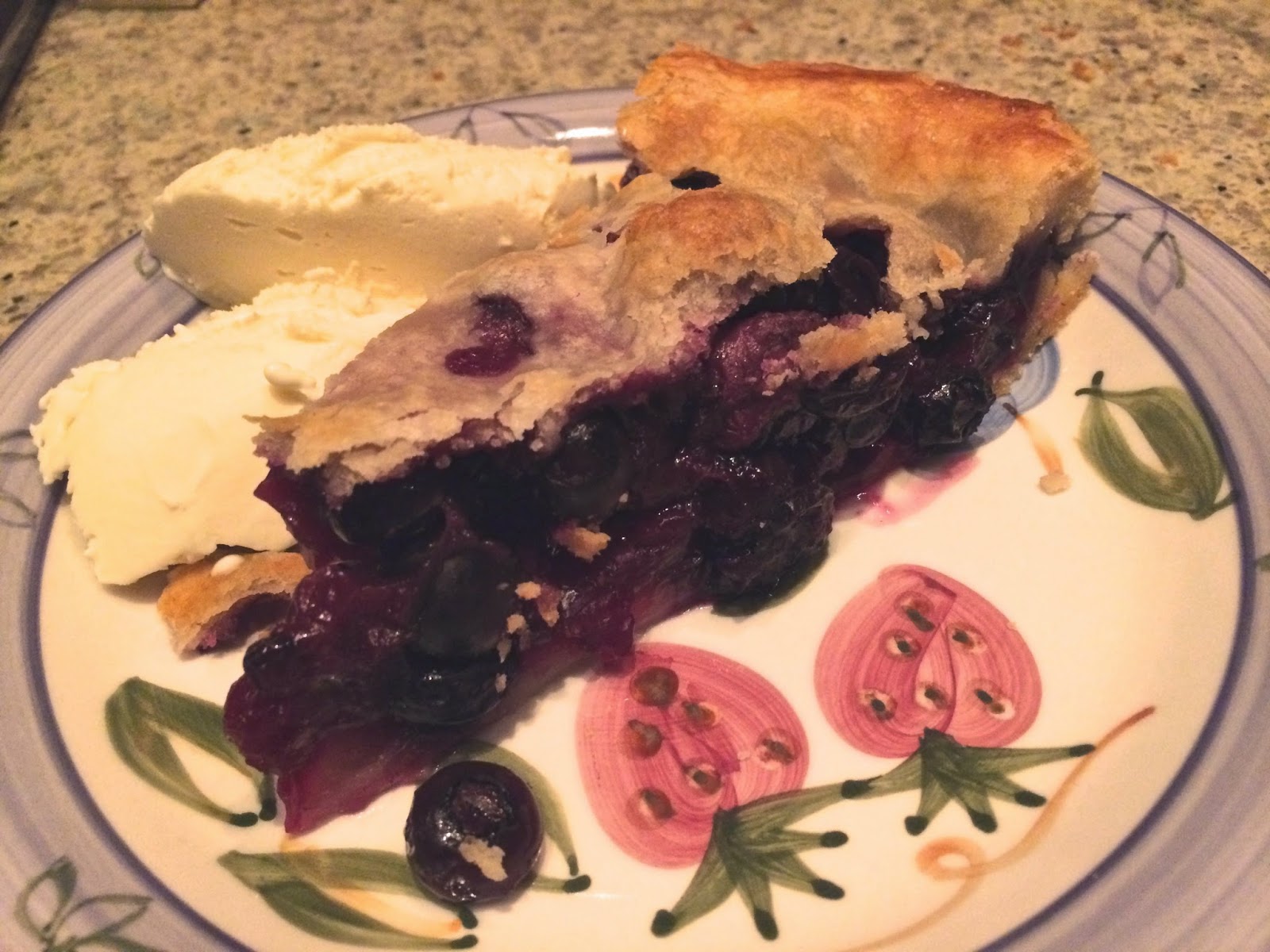 Do you, too, love fruit pies?

Is sour cherry your favorite, like it is mine?

Send me your recipes! I want to make them!

Also I have a box of small, regular (not quick-quicking) tapioca pearls and I'm not sure what to do with them. If anyone has a fruit pie recipe which involves the use of these tapioca pearls, I'll be forever in your debt!
Posted by Lenore