Hi Everyone! It's been a couple of weeks, and I apologize for that. We just moved, as I may have mentioned, and we have pesky jobs, and, well... here's another recipe that I love! I made it in the old apartment. A couple of weeks ago. We're full-time in the new place now. Next post should have awesome lighting, yay!

I first made this tomato soup for a group of our friends while vacationing in the Poconos. We had it with grilled cheese, as one generally must do when eating tomato soup. I started with this recipe from Emeril Lagasse and I've since tinkered and changed it so it better suits my needs. (I do NOT make the grilled cheese from Emeril's recipe. Not for any particular reason. I'm a GC traditionalist myself... all I need is bread, butter, cheddar, and maybe a clove of garlic to rub over the toasty bread edges at the end.)


The recipe also involves apple cider vinegar and sugar, cooked together until it's a light caramel and then stirred into the soup at the end as a sweet/tart balancer. I don't do this. It confuses me.

The original instructions basically say to cook the prosciutto, bay leaf onion, celery, carrot, and garlic in butter until they are tender. Then add the tomato paste, cook it for a minute. Add the flour, cook it for a minute. Then the tomatoes and broth go in and cook for 20 mins or so. Finally, the soup gets pureed and the cream is added at the very end. Season to taste.

I follow this same process, more or less, but I use more vegetables, canned (not fresh) tomatoes, and less cream. I add a few more herbs (like basil and oregano) for some complexity. I also sometimes skip the prosciutto or, more often, I will use a strip or two of bacon instead. I don't like rich soups, which is why I bump up the veggies/broth while simultaneously reducing the cream. A little bit of cream is good, though, for rounding off those tomato edges. If I have an open bottle of red wine, I add a splash of it. 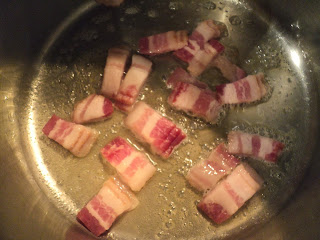 I crisped up the bacon, took it out of the pot, and then added the veggies so they could sautée in the bacon fat. I did not use any additional butter or oil. 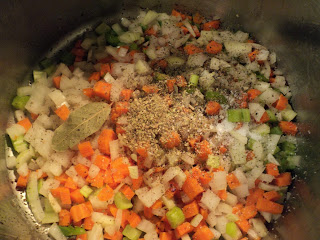 Dried bay leaf, oregano, and basil all went in at the same time as the veggies. The longer dried herbs can cook, the better! I also added some salt and pepper at this stage. I let the vegetables cook until they're transculent and/or a bit soft. 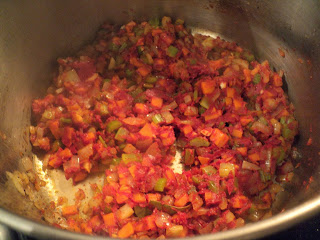 Tomato paste goes in, gets stirred up. I used a whole 6oz can (more than the 1/2 cup, aka 4oz, that the recipe called for.) I let this cook for a minute or two before adding the flour, at which time things got kinda sticky... 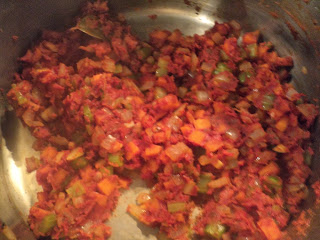 I let this cook until the flour seems fully incorporated and like it has absorbed the vegetable juices. Think about the little grains of flour plumping up. Let it get doughy and/or gloopy. Then I added the two cans of tomato, two super cheap cans of chicken broth, and a splosh of wine.
I let this cook together for 20-30 minutes until all the vegetables were tender and the flavors seemed well melded. Then I picked out the bay leaf and the thyme sprigs, and it was time to blend... 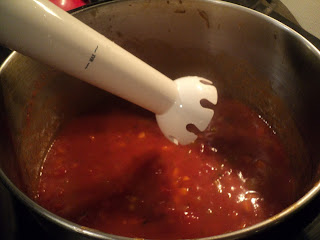 What's that? Your immersion blender is acting funny and won't work?
But do it in small batches so the soup doesn't explode out of your blender, burn you, and make a big mess. I didn't do that, by the way, but I did come close. 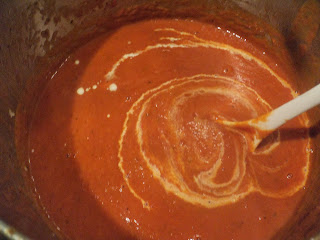 Taste for salt/pepper, add hot sauce and/or cayenne (I vote both!) and you're done! The soup is delicious. Healthy, warming, perfect. I topped ours with the crisped bacon... 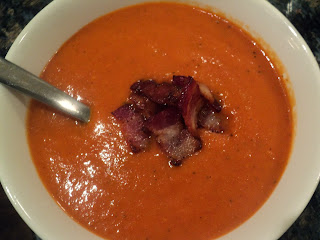 And on Day Two I made awesome cheesy croutons... 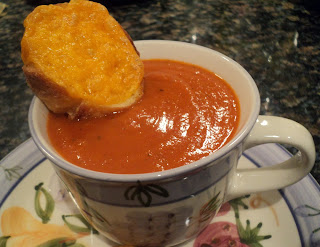 This soup is the best. Tastes great. Freezes well. You should make it! A double batch!
Posted by Lenore