aka the "hers" cocktail from our wedding

Here it is! Here's how the sausage was made! See my earlier post on shrubs for a full explanation of what we're working with.

We bought three (or four?) boxes of blackberries from Pike Place Market. One box is about six pints. But we only got one such box at a time since the process was a mess and labor-intensive. We wanted to work with the freshest fruit possible. So we would buy one palate of berries, process it, wait a week or two, then buy another. 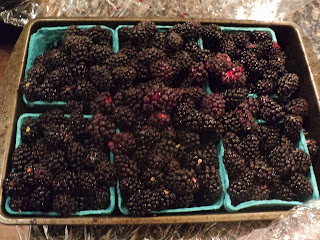 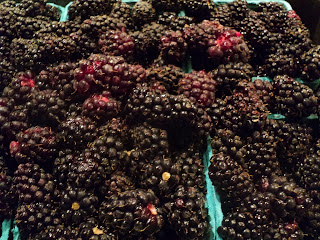 We mixed the berries with an equal portion of sugar, which ended up being ten cups per box of fruit. I also added a couple peaches per batch, just for fun. For two of the three batches, I added a little bit of rosemary, cinnamon, and/or star anise for additional complexity. We mixed the sugar really thoroughly...
And we left it in the fridge for two whole days in order to fully extract the juice from the fruit.
Pretty neat, huh?
Then it was time to strain the sugary juice from the fruit solids. This part was... not easy. Here's what we did two of the three times, before innovating.* 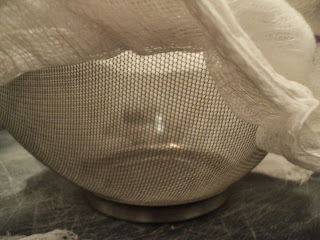 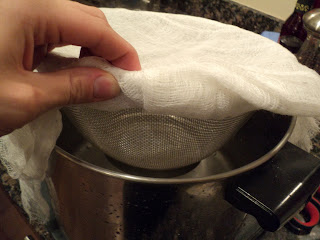 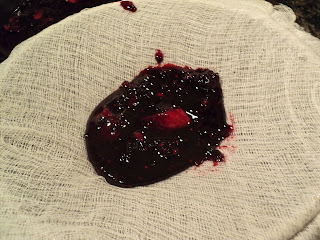 * The "innovation" was putting cheesecloth UNDER the strainer rather than over. That way the largest seeds and fruit pieces would be stopped by the strainer and the cheesecloth wouldn't get quite so "blocked up."

When the fruit was all strained, we measured our yield... 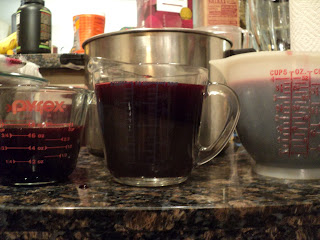 And we added a complementary quantity of red wine vinegar (or cider vinegar). If we started with 10 cups fruit and 10 cups sugar, we would add something like 5-8 cups of vinegar, tasting as we go to make sure it has an appropriate amount of zip.

Then we bottled the shrub in large mason jars and labeled them according to batch number and date of production... 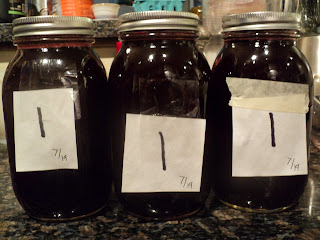 And we stored them in the fridge.

Since all three batches were a little different (more vinegar, less vinegar, more spices, no spices...), we did blend them all together a few months later so each bottle would have the same combination of flavors. We also added about half a shot of gin per bottle to make them even more bacteria-resistant---the whole point of shrubs, after all, is to preserve fruit past its proper season. The acid content alone, from the vinegar, was probably enough. But I spoke to a bartender about this while lunching on Capitol Hill and he recommended we add a tiny bit of alcohol to further secure the lovely potion. So add we did!

For shipping east, we moved the shrub from glass mason jars to large, BPA-free Nalgenes. And I THINK people really enjoyed this at the wedding! The cocktail was to be shrub, soda water, and gin, but I suspect the drink slingers were adding some frozen raspberries too... which I'm sure didn't hurt.

And that, my friends, is how we did it!

Next post will be real cooking, I promise.
Posted by Lenore