Continuing my interest in using my new cookbook, this past week I decided to make Beef Bourgignon. AKA Beef Burgundy, AKA "beef stuff with wine." It sounds very fancy, but don't let the French fool you: this is a peasant-style meal, intended to use the cheapest and toughest cuts of meat in the most delicious way possible. Basically wine-y pot roast. I checked my new book for a recipe, and I found four.
I cobbled these recipes together to create my own. This, for the record, is essentially what I always do when I cook... I just more typically use the internet rather than a physical book.

Here's what I used:
This made three hearty servings. I think it could be comfortably feed 4, but you might want to serve a salad or something too to be sure. Alternatively, you could do what I intend to do next time, which is: get a second pack of beef, add more veggies and a whole bottle of wine, and enjoy leftovers for a few days.

In making this recipe, I committed to doing more work than I usually would for a slow cooker recipe. Which is to say, I invested in browning the meat in advance and creating a beautiful fond. Also, regarding the Côtes du Rhône: This is a blend of grapes, from the Rhône region of France, which is light-but-not-too-light and generally a terrific crowd-pleasing red. It's not too tannic, it's not too fruity. I'm no expert, but in my opinion, these are also great bargains with completely acceptable bottles being in the $8-10 range. Of course there are expensive Côtes available. Maybe you've heard of Châteauneuf-du-Pape? I had a French professor once tell us, on the last day of class, that if we remember anything at all we should remember that if anyone ever offers you a Châteauneuf-du-Pape, you say yes. I've seen C-d-P's in stores in the $30-100 range, which still could be worse but it is certainly in the area of wines that I'd prefer to sip, very slowly, rather than dump into my crock pot.

Anyway, technically speaking, Beef Bourgignon should be made with wine from the Burgundy region, meaning... French Pinot Noir! These can also get quite expensive. I jumped the ship on this one and chose a good quality cheapish wine instead.

Back to the food!

I started with warming up my largest heavy-bottom soup pot. I chose my high-sided pot because I wanted to reduce the grease spatters on my stovetop... the pot you use actually just needs to have a large-ish base. It does not need to be deep. I sliced five slices of bacon into smallish pieces.
I crisped the bacon up in my big pot... 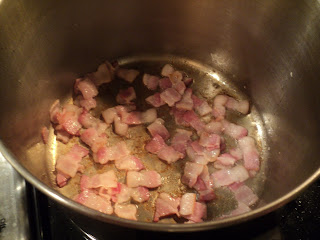 And then moved it to a paper towel to drain.
Then I browned the beef in that lovely bacon fat. I did this in two batches so the meat wouldn't be crowded. I had the heat on medium-high and basically let 'er rip for a few minutes per side.
And this, my friends, is what you're looking for: 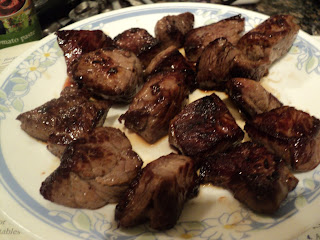 Sidestep: while the meat was browning, I cut up an onion and made sure I had the wine, etc., handy. 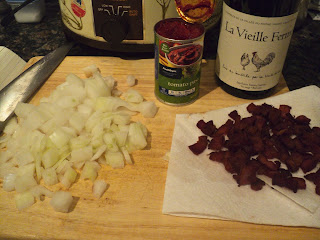 After I took all the beef out of my pan, I took a quick photo of THE FOND and then I lowered the heat and added the onions so they could cook in all that bacony beefy glory.
When the onions were nice and translucent, I added a few dabs of tomato paste: 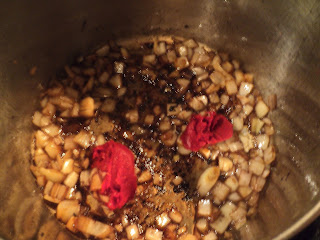 I stirred this around, let it cook for a minute, then I added two heaping spoonfuls of flour.
Then I added exactly 1-1.25 cups of red wine. Precisely. And mixed thoroughly. 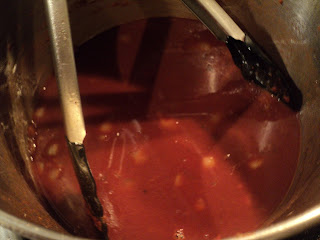 And then I put everything (beef, onion-wine mixture, half of the crisped bacon) into my slow cooker. Look how clean my big pot was afterward!
Finally, I added some fresh herbs to the slow-cooker...
I would have dumped in a can of beef broth, but when we went the the store this past week, I don't know, I was annoyed at the thought of purchasing broth again. I feel like I'm always buying 1-2 cans or 1-2 cartons of some kind of broth and I just though... "enough already!" Hence, my explorations of Better Than Bouillon. 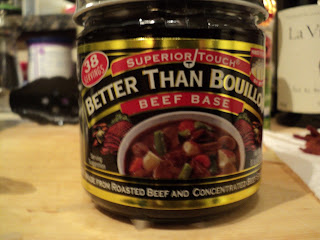 I think it's basically concentrated broth? Or stock? I know a friend of mine back east is a fan of the chicken variety for her noodle soups (Hi MW!), but I personally have never played with it until this present venture. Anyway, I essentially followed directions on the jar: I took a spoonful of BtB, and I dissolved it (sloppily) in about a cup of water. 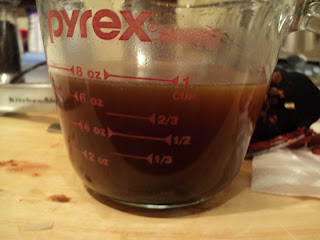 The "broth" went into the pot with everything else, and I let it go on low for about eight hours. Here's what it looked like after five minutes: 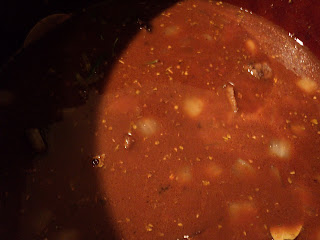 After the stew cooked for six hours, I added a few more veggies. Specifically: carrots, pearl onions, and  one purple potato. Why one purple potato? Because the yellow potato I had went rotten in our potato drawer and I didn't notice until it was too late. For next time: I'd use regular yellow or white potatoes, or better yet those small red boilers. Just a few, though. The meat (and sauce) is the star. 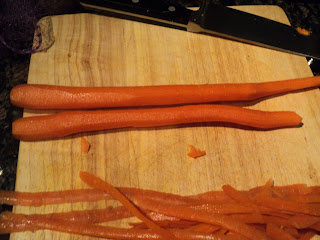 I let the stew cook for another two hours, testing the tenderness of the veggies after the first hour. I also started tasting for salt/pepper/etc. I think the only flavor addition I made was salt, though. The sauce was wonderfully complex and layered without my usual tinkering! I did also add a sprinkle of flour (and stirred it in thoroughly) because I wanted the sauce to be rich and thick and I knew the veggies would release some water as they cooked, thus thinning the sauce a little.

Once the total cooking time had hit eight hours and the carrots were tender, it was time to eat! I sprinkled the leftover crispy bacon pieces on top for crunch. I think a little parsley would have been nice, too, for color. 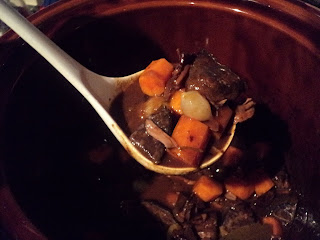 I think that, traditionally, this is served over egg noodles. We're trying to limit the simple carbs, so we had just buttered, crusty bread.... rather than noodles AND crusty bread. Because let's be honest, bread is going to be a part of a meal like this however way you slice it.

The verdict: This recipe takes a little time and attention, but honestly I think it was just an hour or an hour and a half of "active" cooking time, spread across a whole day. Not too bad! Perfect for a Sunday dinner. The sauce was deep, velvety, and luscious from the flour, which thickened it, and the layers of flavor from the bacon, the browning of the beef, the onions, the tomato paste, the wine, the broth, the herbs, and the time spent braising. Definite recommend. Only change for next time? Make more of it!
Posted by Lenore